Will the American Auto Industry Save Us All (Again)? 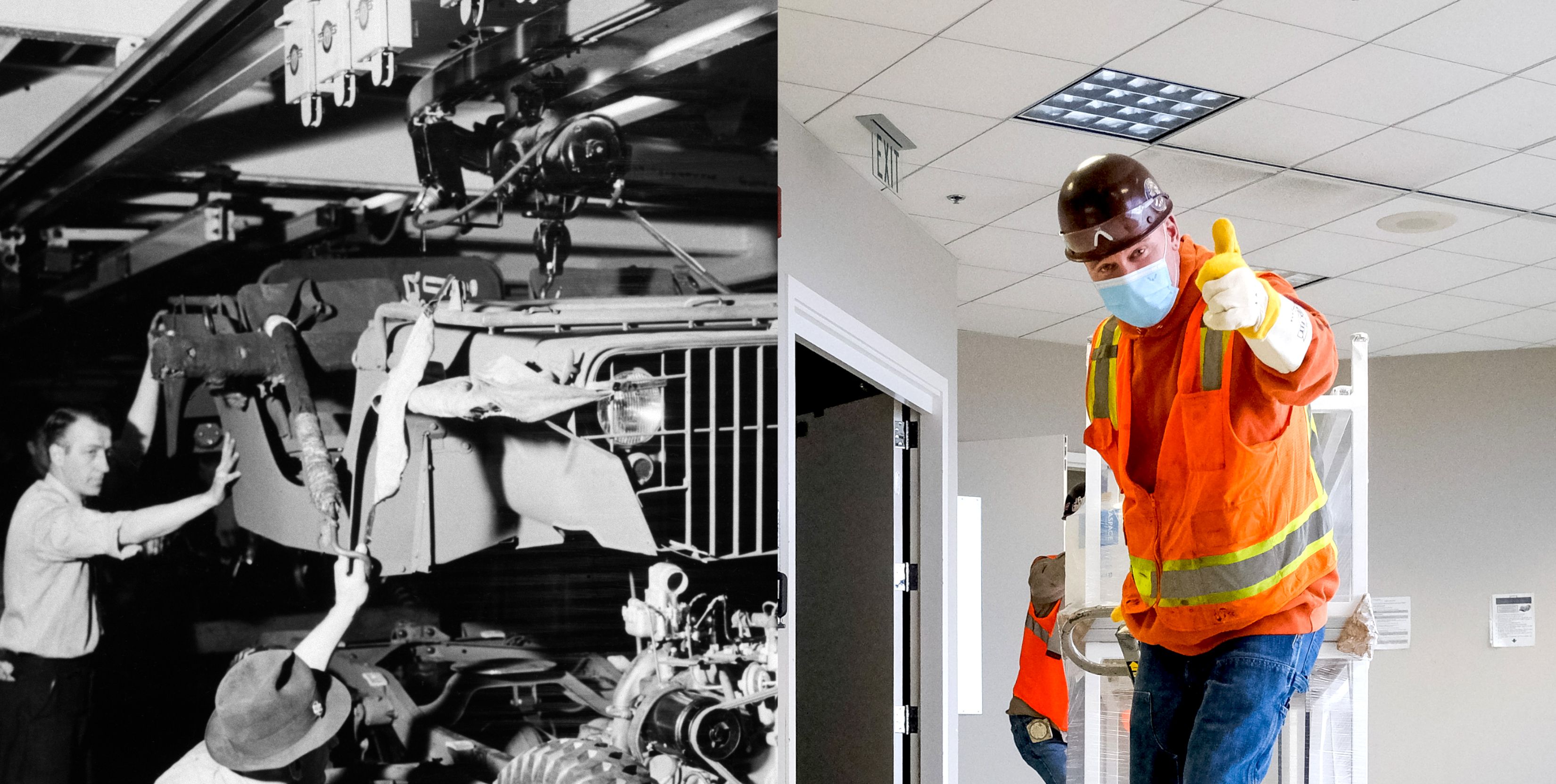 Trivia question: Who said this? “Never before since Jamestown and Plymouth Rock has our American civilization been in such danger as now.”

It was Franklin Roosevelt in his “Arsenal of Democracy” speech, delivered on December 29, 1940, to the largest radio audience ever up to that time. But it sounds like a sentence any of us could utter today. Back in 1940, Hitler’s armies were rampaging across Europe, the Nazis seemingly unstoppable. A fact that often slips through the cracks of our national consciousness is the degree to which we were losing World War II desperately for roughly the first year and a half of the fighting. We had the soldiers, but we lacked the tools. Ultimately it was the automobile industry far more than any other that created the arsenal that allowed the Allies to win.

Now once again we face an existential crisis, and once again our government is asking our auto industry for help. Automakers are plunging forward to build ventilators and masks in this new scenario that feels almost like science fiction. “Ford, General Motors and Tesla are being given the go ahead to make ventilators and other metal products, FAST!” President Trump said on Twitter on March 22. “Go for it auto execs, let’s see how good you are?” Days later Trump was attacking General Motors, using the Defense Production Act, as a tool to press GM forward in the ventilator effort with greater speed. It was like FDR’s “Arsenal of Democracy” speech recrafted by the pugilistic president. GM was “wasting time,” the president said.

Can the automakers pull this off? Can they do it fast enough so that their work will be useful soon? We don’t know yet. However, a look in the rearview might give us some clues.

At Ford’s Willow Run plant in 1942, draftsmen work on designs to convert to mass production of war equipment.

When FDR first asked private industry for help during World War II, he knew the auto industry was key. The industry had a bigger economy than every nation on earth except Britain, Germany, France, and possibly the Soviet Union. The war was shaping up to be a contest of mass production; in this newly mechanized kind of warfare, the side that could produce the most war machinery the fastest would win. FDR brought William Knudsen, GM’s president and the highest-paid executive in the country outside Hollywood, to Washington to serve as production czar, with a salary of $1.

“Bombers, big bombers,” Knudsen said, “are needed sooner than we dare hope to get them under present circumstances. We must build them at once! You’ve got to help! The first half of 1941 is crucial. Gentlemen, we must outbuild Hitler.”

The conversion to wartime desperately rattled the U.S. economy—another parallel to what we are seeing today—as businesses that were not able to serve the war effort largely disappeared. Business Week called this phenomenon in 1943 “the most severe contraction in the business population that we have ever experienced.” Sound familiar?

The American war production job was probably the greatest collective achievement of all time. —Donald Nelson, War Production Board

Chrysler had never made tanks; in a factory built from scratch, the Detroit Tank Arsenal, Chrysler made roughly as many tanks during the war than all the Nazi factories combined. Ford—which became the nation’s third largest military contractor—built a production facility called Willow Run, the largest factory under one roof in the history of the world, churning out 18,482 B-24 Liberators. So many laborers worked at Willow Run, the government had to build a city from scratch—”Bomber City”—to give these people homes and infrastructure near the factory (rubber tires were rationed, so commuting was all but impossible). At the start of the war, the B-24 Liberator was the biggest, fastest, most destructive bomber in the American arsenal. Still today, because of Ford, the B-24 remains the U.S.’s most mass-produced military aircraft of all time.

It is no exaggeration to say that the auto industry saved the world. Said Donald Nelson, head of FDR’s War Production Board: “The American war production job was probably the greatest collective achievement of all time.”

The Big Three Were Medical Innovators Back Then, Too

The story of Detroit’s efforts during World War II is well known today. What is not is the fact that the auto industry also has a history of innovating medical products. On November 30, 1955, GM announced that it had developed “an ingenious mechanical sterilizer” called a Centri-Filmer. The company partnered with medical researchers at the Michael Reese Research Foundation in Chicago to create this device, which spun liquid vaccines in a centrifuge into a layer 1/20th the thickness of a human hair. Ultraviolet light then blasted through the film, “killing” viruses in vaccines (making the virus unable to replicate, so vaccines could do their jobs without making people sick).

GM via Free Library of Philadelphia

In 1979, GM researchers developed a new “ostomy appliance system” consisting of a plastic pouch assembly, an elastic belt, and a soft seal ring. The system aimed to make colostomy bags easier to wear and maintain.

The medical feat for which GM is most-known is nothing less than the first mechanical heart. The story begins in the 1940s, when a cardiologist at Detroit’s Harper Hospital named Forest D. Dodrill had an idea. At the time, heart surgery was largely palliative because the heart had to function during the operation. Dr. Dodrill had the idea of creating a machine that could pump blood like an engine pumps fuel, so blood could circulate while surgeons worked on the heart. He turned to GM to design the thing (GM’s president, Charles E. Wilson, was at the time chairman of the board of the Michigan Heart Association). A team of GM engineers went to work under the leadership of one Edward V. Rippingille Sr.

“We have pumped oil, gasoline, water and other fluids one way or another in our business,” Rippingille figured. “It seems only logical we should try to pump blood.”

On July 3, 1952, Dr. Dodrill and a team of surgeons operated on the heart of 41-year old Henry Opitek at Harper Hospital while a machine that resembled a V-12 engine (it had six pumps on each of its two banks) pumped Opitek’s blood through his body. As the New York Times put it in a 2018 article, “Detroit muscle powered a heart and gave Henry Opitek another 29 years of life.”

Both Ford and GM have history innovating health-care systems. Henry Ford saw in the early years of his company that the massive movement of people to the Detroit area to work in his factory was going to require healthcare infrastructure, and so in 1915—the heyday of the Model T—Henry Ford Hospital opened to the public. Today the Henry Ford Health System employs over 1200 physicians. In the 1940s, Alfred Sloan (the longtime chief of GM, often called the father of the modern corporation) and Charles Kettering (head of research at GM for decades) joined forces to create the Sloan-Kettering Institute, a biomedical research unit which today is known as Memorial Sloan Kettering Cancer Center.

And History Repeats Itself

Now today, the auto industry is going to work to build ventilators, respiratory masks, and who knows yet what else. On March 24, Ford CEO Jim Hackett told CBS News that his company is designing two to three versions of breathing apparatuses for front-line medical workers, but also, “hundreds of thousands of the simplest [masks] will be started to be produced in the next week or so.” One challenge that engineers did not face during their heroic work of World War II is how to put workers on assembly lines without putting a lot of people in one place and thus creating potentially hazardous virus-spreading conditions.

“A factory is all about working together on a line,” Hackett said. “So the way these teams are designing the production of this [ventilator] is building subassemblies in smaller groups and having them come together to be assembled.”

As it was in wartime, the future today is a question mark. How long will this new plague stick around? Will it come back next flu season? One thing is for sure, however: the U.S. auto industry can help. Said Hackett: “We are ready to go.” And, as in World War II, time is of the essence and lives hang in the balance.