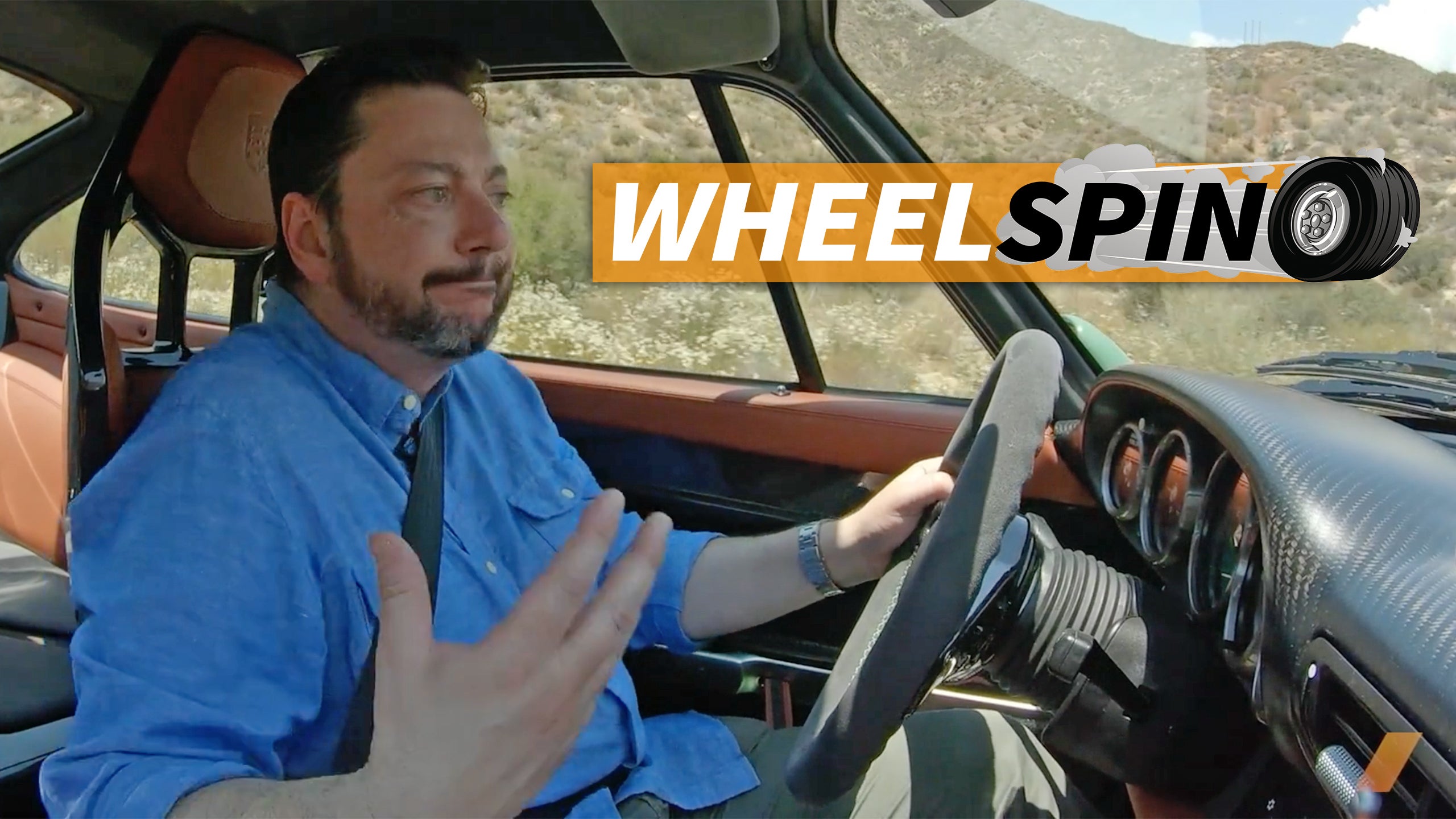 I get it. You need another opinion columnist like a muppet needs another hand up its shirt. Most days I’d be with you, but so little about today’s car-enthusiasm environment makes sense. Valuable features on 3G-connected cars are going dark. The CEO of an automobile manufacturer has his own digital hit squad. Someone has to explain why BMW’s kidney grilles have swollen to the size of whale nipples. On this bi-monthly page, that guy is me. (I honestly have no idea what’s up with BMW’s kidneys, and even the most loose-lipped Bavarians aren’t talking.) Welcome to my new column: Wheelspin.

The great Irish-British novelist Iris Murdoch, author of “A Severed Head,” which isn’t about what you’d think, once said, “We live in a fantasy world, a world of illusion. The great task in life is to find reality.” Who’d I tick off to get that detail? Don’t ask, but I’m back and who knows what could happen.

Eighteen years ago this October, as “Napoleon Dynamite” was reviving the popularity of Tater Tots, I started a website called Jalopnik. Back then, blogs and forums were social media in the car world. We shared information about maintaining and upgrading vehicles on make-and-model fan sites, and also dragged the guy who came up with Direct Exhaust Injection around the block a few times. Wide-view forums like The Car Lounge were pioneering a new, inclusive domain for car-culture enthusiasm, although the Vee-dub kids ran that place like it was their own little VR6Land. Still, it was a good time.

Online community dynamics often led to the inevitable: bad information, trolling, and factional revolts, as the great Audi World–Quattro World Insurgency of 2007 bore out. Forum moderators had their hands full, but at least it was exciting. It was also a fertile time for innovation, like merging the anything-can-happen intensity of forums with the reporting rigor and access of professional journalism while amplifying the knowledge and experience of the crowd. That was our dream, anyway. Sometimes it even came true.

Traditional forums are less popular today, but remain valuable. And the social media platforms have evolved tremendously, whether your jam is complaining about Bring a Trailer prices on Weird Car Twitter or making TikTok videos that anyone over 35 might find completely baffling. I don’t buy the notion that journalists are destined for irrelevancy, however, or that leaving information-gathering to dispersed participants working for community clout yields the most objective information. That’s just some shit technocrats put in their investor decks. But of course, I would say that. I’m defending my obsolete human job from the inevitable programmatic takeover. As one does.

Either way, I’m a lunch-pail hack at heart, but I’ve always thought the most important things we do in this business, the reporting, the storytelling, the “takes,” should be the leading edge of a conversation. People who love cars are some of the most committed, cranky, opinionated, knowledgeable enthusiasts anywhere, and treat dilettantes the way Andre the Giant treated a 48-ounce porterhouse. They also love to share experiences and insights, which is why car communities are some of the strongest around.

Don’t get me wrong. Lobbing grenades from tribal compounds can be entertaining, but if at times we confronted one another in good faith we’d get a lot more out of any digital platform. I’m laughing at my own naivety, because just about any Tesla thread on Twitter suggests that’ll never happen. The point is, the more we get to know each other, the more we’ll trust each other, and I’m counting on you to hold me to the standard you expect. Actually, forget it. Don’t tell me what to do.

Three on the Tree

Anyway, to kick it off, here are three important things that have happened since those early Jalopnik days. One is obvious, the other two may be obvious to you, or may not be. Either way, all three shaped the auto industry and car culture in ways that portend even greater changes to come. You may not agree. Change my mind in the comments.

Tesla. Effective-but-bonkers polymath Elon Musk, casting himself as King David of the Old Testament — with legacy automakers and journalists as the Philistines — launched a new, mass-market American carmaker and made it stick. It was a multidimensional effort: deep hardware and software competence, purpose-driven marketing, and Wall Street’s insatiable appetite for speculative risk.

Add to that a mastery of information chaos by Musk that would make a cult leader blush, plus billions in government grants and loans and a huge bank of carbon regulatory credits to monetize. Henry Ford, in comparison, was like a homo habilis cracking a walnut with a rock.

Musk rallied supporters with an us-against-the-world zeal, which now burns hotter than the Ferrari cheering section at Imola. He jammed Silicon Valley’s product-iteration playbook up Detroit’s tailpipe, soliciting car buyers to be “beta testers” and teaching legacy car companies (and auto journalists) what “minimum viable product” means in an automotive context, setting off a culture clash between Car Twitter and Tesla Twitter. Then Musk bought Twitter, so now Car Twitter is Tesla Twitter, and Tesla Twitter is, you know, just Twitter.

After nearly exploding in a fiery stressball of lithium, cosmoline, and pot smoke in 2018, Musk has mostly wrestled the “hell” of car manufacturing to the ground. He re-engineered the technology hype cycle to avoid the Trough of Disillusionment, and found an operational sweet spot between over-promising and underdelivering, and underpromising and over-delivering. No one’s done that since Lee Iacocca with the K-car.

Yes, its paint jobs are thin, but Tesla’s wallet is fat. In 2021, the company shipped nearly a million cars, turned a profit of $5.5 billion, and saw its market cap pop over $1 trillion, reflecting expectations the electric-car market will go parabolic in the near future, and that Tesla will continue to lead it. Musk, who predicts 50 percent sales growth each year for the next several years, is now the most powerful auto executive and richest person in the world, with a paper net worth in the $200 billion range (similar to Henry Ford’s at its peak, adjusted for inflation), while Musk’s supporters still think he’s poor old Preston Tucker, bullied and oppressed by elites and nonbelievers.

Did you see any of this coming? I did not. Let’s check back in around 2036 and see if he’s replaced us all with humanoid bots and busted up the dealership lobby yet.

Goodbye Two-Seat Utes. More than a decade ago, General Motors “car guy” and vice chairman Bob Lutz teased that Australia’s beloved coupé utility, or ute — aka Chevy El Camino — might return to the U.S. market. It didn’t. GM’s full retreat from the Australian continent in 2020 stuck a fork in that dream, thus ending the batshit world of high-performance car-pickups we admired quizzically from afar. (Ford Australia also discontinued its Falcon ute.)

With little motivation to support regional quirk in an increasingly standardized, globally-oriented marketplace, it’s likely we’ll never see anything this off-the-chain again. Maybe in the future, when standard EV platforms and low-tooling production make quirky vehicle configurations cost-effective again will the ute make a comeback. The final, LS9-powered Holden HSV Maloo GTSR W1, a salad of ASCII characters meaning “off like a prawn milkshake in the sun,” sold at auction in Australia for $855,655. To paraphrase Captain Cook, the Southern Hemisphere sure is a funny place.

Hello Doug DeMuro. It’s funny that people say the automotive press is a monolithic, “big media” power establishment. It isn’t. But do you know what is? Doug DeMuro. He’s got all the usual quirks and features of success, and more: he works hard, he’s good at his job, and he’s used new media to revolutionize a tired trope, video car reviews, making them more accessible, practical, geeky, and fun—and less inside baseball-y.

In the process, Doug built a huge audience and stumbled into the most improbable media empire that could be imagined. He also started his own car auction platform and became the closest thing to a car celebrity the U.S. has seen since ol’ denim shirts. Doug is as important to this business as Tom McCahill or Brock Yates was. He’s working harder than ever and I wish him endless success. Also, screw that guy for being so damn likable.

Runner up. Bring a Trailer for turning auction sales into daily automotive media, fostering a community that adds value to the online auction process, and making container-ship loads of money doing it. Kudos to Hearst for getting its old-media hooks in there, leaving something important for Hagerty to not buy.

Mike Spinelli has covered cars and car culture in print, online, and on family cable TV, which is as glamorous as premade pancake batter. Send him tips, comments, and story ideas at [email protected].