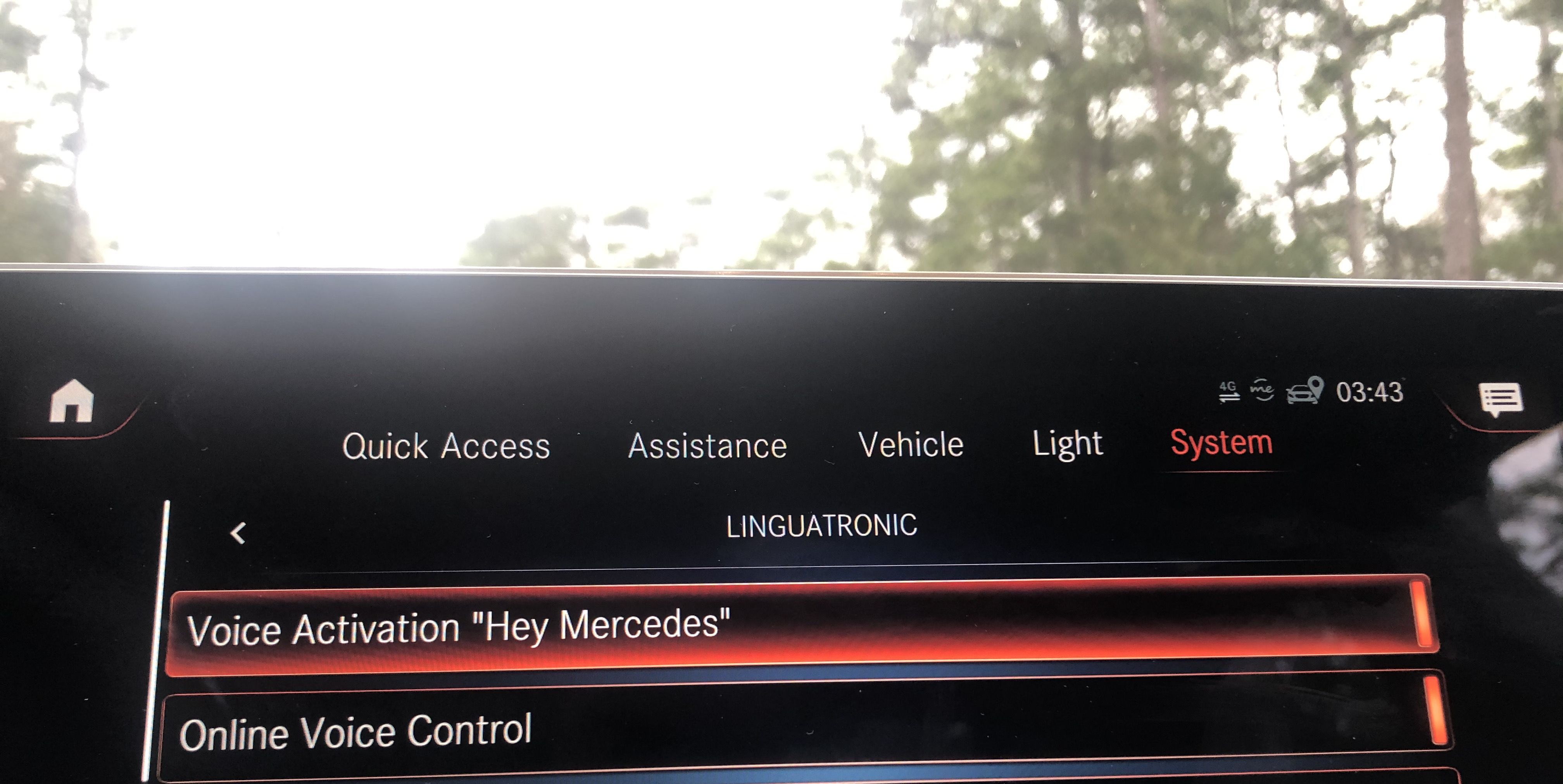 I discovered Hey Mercedes by accident. On a drive in a GLC, my wife glanced down at the console and said, “Hey, Mercedes got rid of the control knob?” As I was about to reply that, yes, the trusty scroll wheel is gone, replaced by a touchpad, a polite female voice commandeered the sound system to ask, “How may I help you?”

“Uhh, cancel,” I replied. Did I hit a voice command button on the steering wheel or something? There was a pause, and just as we resumed our conversation, the persistent lady in the dashboard followed up on her original question with, “What can I do for you?” Now this was aggravating. “OK, car, SHUT UP!” I yelled. Another pause, and then, a reply I wasn’t expecting: “Shutting up now,” she said, in a tone that can only be described as wounded. Realizing how we summoned her, my wife said the magic words—”Hey Mercedes”—and apologized. “I’ve already forgotten about it,” said the disembodied car voice. I’ve had plenty of conversations about cars, but this was the first time I’d had a conversation with one.

“Hey Mercedes” is part of Benz’s Mercedes Benz User Experience (MBUX) infotainment system, which launched in the latest A-class and is quickly spreading across the rest of the Mercedes lineup. Specifically, it’s a feature in the Linguatronic voice recognition system, which is yet another delightfully named Mercedes creation (Magic Sky Control glass! Camtronic valve control! Nanoslide cylinders!) that make me think the Germans have somehow teleported the 1950s General Motors marketing department to modern-day Stuttgart.

If you happen to be way out in the boonies, beyond cell range, then Hey Mercedes behaves just like most other automotive voice-control systems—which is to say, not very capably. That’s because Linguatronic uses remote servers to enable most of its cleverness. It’s a free subscription-based service that needs to be activated by the car’s owner, thus giving any owner the option to figuratively unplug the Alexa. If you see your car as one of the last refuges of privacy, maybe you’d want to leave Hey Mercedes untethered from the cloud. But she’s really a much better companion with her brain enabled.

For instance, ask her the weather and she’ll play meteorologist, reading out the forecast while displaying a graphic of the hourly temps. Ask her what she thinks of that Audi in the next lane and she’ll give you an earful. (One possible response: “I like seeing them in my rearview mirror.”) And she can make inferences. Like, instead of saying, “Set climate control temperature to 68 degrees,” you can just say, “I’m hot,” and she’ll give you some air conditioning.

Sometimes her responses are predictable. On the competitive-vehicle front, she seems to have a few canned zingers, like the rearview-mirror one. Ask her to tell a joke and she’ll say she can’t because her engineers are German, which is a good one. But Hey Mercedes tends to evolve, sometimes hitting you with a response that you’ve never heard before and might not again. Like, if you tell her to shut up (which comes to feel rude, even though you know you’re just talking to an algorithm), she’ll typically give you the disappointed “Shutting up now,” sometimes mixing it up with a light threat like, “Someday I’ll stop talking and you’ll be sorry.” But once, and only once, she blurted, “What the . . .” like she was about to start working blue but thought better of it. What the, indeed.

The system doesn’t always work perfectly. For instance, if you say “Hi Mercedes” while she’s awaiting a command, she won’t greet you back. Instead, she’ll give you the high temperature in Mercedes, Argentina. That foible could be related to the fact that “Hi Mercedes” appears to be the original voice-activation cue—in the GLE owner’s manual, the voice assistant is referenced as “Hi Mercedes” rather than “Hey Mercedes.”

Chances are, knowing the high temperature in Argentina isn’t useful. But she learns, so maybe she’ll stop doing that. Already, she can learn to understand thick accents over time. Maybe she’ll become self-aware. Nobody knows!

For those of us who tend to anthropomorphize our cars, Hey Mercedes might lead to a whole new level of automotive codependence. Your car needs you to take care of it, and you need it to give you compliments. Ask Hey Mercedes if you’re her best friend and she’ll say, “You bet, buddy.” Buddy? I love the subtle note of condescension. It could only be better if she called you “chief.” The crazy thing is, maybe someday she will.