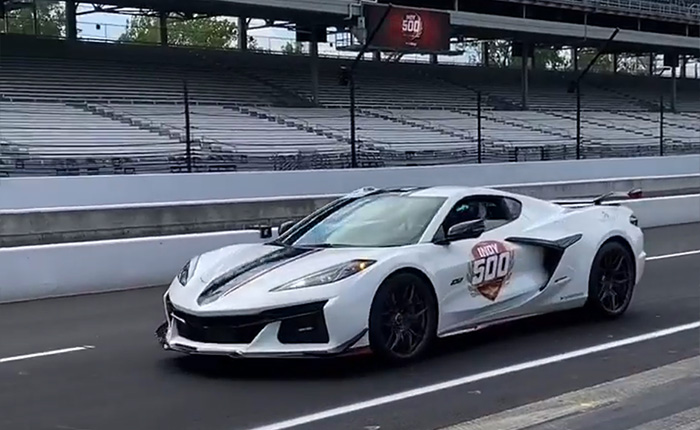 On Sunday morning we got the word that our friend Byron Glover Jr was attending the Indianapolis 500 as a guest of Chevrolet with a group of influencers. If you haven’t seen his hot lap in the Z06 with Aaron Link behind the wheel, you’ll definitely want to schedule a time to watch as he hits 163+ MPH! Yeah, it’s a really good video.

Also attending the Indy 500 with Chevrolet is EddieX who did that really informative and entertaining Z06 ride-along that was released following the reveal last October, as well as Emelia Hartford who took part in reveal of the Z06 and was featured in several of the teasers leading up to it. Last but not least is an awesome two-lap ride around the historic 2.5-mile oval track thanks to Team Chevy!

First up, we’re sharing this very cool video from EddieX who captured a couple of the 150+ MPH flybys as the Z06 Pace Car raced down the main straight. His quick video also has some in-car footage of his hot lap as well as some of the exhaust note as the Pace Car was being moved in the pits:

In this short Instagram video from Emelia Hartford, she is given the keys to an Arctic White Z07 Convertible that’s parked in the in-field and proceeds to rev the hell out of the LT6 as only a YouTuber can…

Thanks to Team Chevy for this fantastic ride along posted to Instagram as the 2023 Corvette Z06 Indy 500 Pace Car makes two laps around the track. There is absolutely no talking in this video, so you can really get a great listen to the 670-hp LT6 engine.

Car Insurance Quotes Online Info: How to Find Quotes and Get Discounts on Auto Insurance