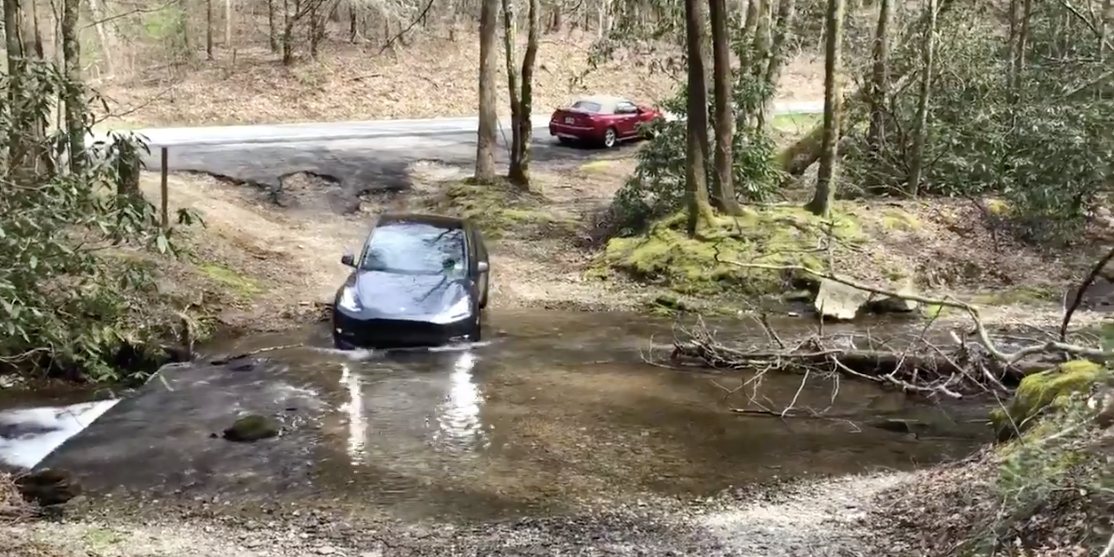 Customers are finally starting to take delivery of the long-awaited Tesla Model Y electric compact crossover, which was announced back in March 2019. Elon Musk has touted a driving range of up to 300 miles and a zero-to-60-mph time as low as 3.5 seconds. But what Tesla’s CEO didn’t mention was the electric crossover’s off-road abilities. That’s exactly what Mike McGinnis set out to do with his Model Y by taking it “off-roading.”

The best part of McGinnis’s video isn’t even the Model Y driving through a puddle—it’s the comments. One Twitter user responded, “I’m sure a Model 3 would’ve driven through that just fine.” He’s probably right, though, as the Model Y has a ground clearance of 6.6 inches, which handily beats the Model 3’s 5.5 inches of clearance.

For reference, consider two of the most serious off-roaders available today: the Jeep Wrangler Rubicon has 10.8 inches of ground clearance, and the Toyota 4Runner TRD Pro has 9.6 inches. User @teslatactics commented on Twitter, “I think that Mustang in the back has more ground clearance than the model Y.” Well, that’s not true.

No matter what you think the definition of off-roading is, we’re all in favor of people getting out and enjoying their cars. We’ll be testing Tesla’s latest soon, and we’ll let you know if we can hit the 300-mile range and zero-to-60-mph time of 3.5 seconds that Elon claimed. The off-roading, though? We’ll leave that to the cars’ owners.