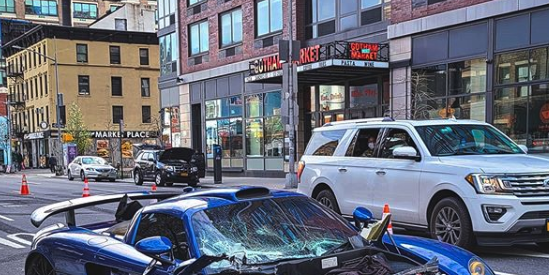 Being the bearer of bad news is never good, but news is news, especially in the world of automotive journalism. Today we must sadly report that an extremely rare Gemballa Mirage GT has likely been driven for the last time, as its owner wrecked the car quite spectacularly this morning in Manhattan.

The Gemballa Mirage GT is an ultra-rare car made by Gemballa, German super tuner for any Porsche ever. The Mirage GT is based on the already amazing Porsche Carrera GT, and Gemballa made only 25 examples. Thanks to one extremely careless owner, there are now only 24. Gemballa took the already amazing Carrera GT and turned the dial up a whole lot more, beefing up the naturally aspirated 5.7-liter V-10 from 603 to 670 horsepower.

The engine bay wasn’t the only place that Gemballa touched with its magic: almost every aspect of the car was tinkered with to extract max performance. Gemballa upgraded the suspension to ace-style coil-over units, swapped in lighter wheels, and upgraded the infotainment system. The most noticeable features, though, are the wicked spoiler out back and the ram-air roof-mounted air intake, both of which give the impression that this car belongs on a Le Mans circuit, chewing up the competition, and certainly not wrecked in the middle of 11th Avenue in New York City.

The blue example that’s likely headed to the scrapyard was owned by GoldRush Rally co-founder Benjamin Chen, according to some great legwork from R&T. As these videos on the scene show (above), it was crashed quite spectacularly into a minivan parked on the streets of Manhattan. The owner was in fact driving the car, and it was not stolen, the publication reported. In the video above, posted by CarsWithoutLimits, Chen appears to have gone very sideways and ended up plowing the front of the Mirage GT into a Toyota Sienna minivan. The crash bonanza didn’t end there, though; he tried to flee despite significant damage to the Mirage GT and ended up crashing into several more cars before authorities caught up. Charges are pending for Chen, according to the New York Police Department, who arrested him at the scene. And rightly so.