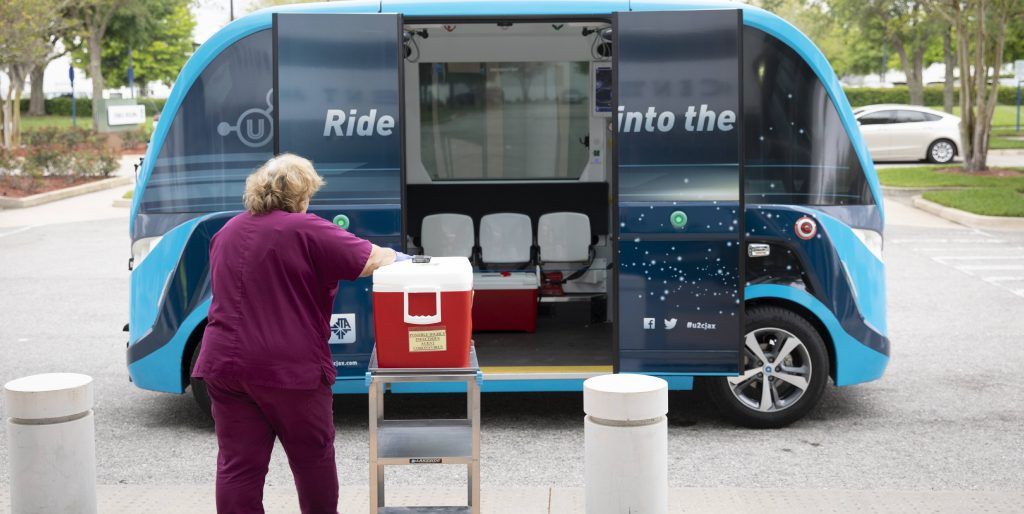 Autonomous vehicles are stepping up to the COVID-19 plate with something to prove. At the Mayo Clinic in Jacksonville, Florida, four self-driving NAVYA shuttles are being used to move medical supplies and COVID-19 tests samples from a drive-through testing site to a nearby laboratory. The clinic says this is the first time autonomous vehicles are being used for this sort of task in the U.S., and it comes at a time when the need to minimize potential person-to-person contact is strong.

Jane Hata, director of clinical microbiology laboratory at the Mayo Clinic, told Car and Driver that using autonomous vehicles to transport the specimens is an “absolutely brilliant” idea. “It is the perfect test bed for the vehicle in that there is an established route for transit, little ancillary traffic, and our specimens can be transported safely in a controlled environment, eliminating the risk to a driver,” she said. “This method has many potential applications in the future for rapid and efficient specimen transport to our lab even as we move beyond the current situation.”

NAVYA chief operating officer Jérôme Rigaud told C/D that one of the ways the whole project is working effectively is because no NAVYA employees needed to travel to the site to help set things up.

“Our team’s contribution was done via remote supervision in conjunction with our partner Beep, with 3D mapping and the needed configurations being sent digitally to our partners to execute on site,” he said.

NAVYA is a French company that has been building shuttle-bus-style vehicles that are equipped with lidar, radar, and video cameras and can accommodate, under non-pandemic conditions, as many as 15 passengers. They were first deployed in the U.S. in locations including Las Vegas and Ann Arbor, Michigan, on a pilot basis back in 2017.

Beep was already NAVYA’s exclusive dealer and preferred partner for shared-mobility autonomous vehicle research and development in Florida before the coronavirus hit, so the pieces were in place to have the two companies work together to get the shuttles operating near the hospital. Rigaud said having trained local partners allows NAVYA to “create moments where we’re prepared globally to handle situations of the sort, so long as the infrastructure is in place on each end. Here, you see a solid infrastructure between two partners, extending down to the training and procedures in place.”

It’s not just the driving that’s automated. The shuttles are programmed to follow the route on roads with other vehicles, sure, but also to stop at dedicated locations and automatically open and then close their doors to allow the medical professionals to enter and retrieve or place the test samples.

Beep was already using three of the four NAVYA shuttles at its Lake Nona, Florida, innovation hub. The fourth vehicle was previously used by the Jacksonville Transportation Authority as part of its Ultimate Urban Circulator program.