Grrrr! With the GR Corolla!

The rumor mill suggested it, but it wasn’t until March came to an end that Toyota confirmed that the GR Corolla is, in fact, REAL. No, this is not some April Fool’s Day prank. The Corolla line is indeed expanding to accommodate a performance variant when an all-new model arrives later this year.

All the delicious details about the Toyota GR Corolla were announced as the first quarter of the year ended. Well, except for one important matter: the price. Based on what the competition offers, a $40,000 price tag seems likely.

And what justifies that cost? That’s easy: Toyota GAZOO Racing engineering and technology that infuses this model. For starters, a turbocharged three-cylinder engine motivates this pocket rocket. It works with a 6-speed manual transmission to shuttle power to all four wheels. That’s right – row your own meets four-wheel control.

With Toyota delivering a performance hatchback, the company has solidified its racing credentials with American drivers. In more recent years, we’ve seen the GR Yaris emerge on the world stage, but it never arrived stateside. And to the disappointment of fans who have seen what the company has done to the GR Supra and to a lesser extent the 86 GT.

We have the details about the GR Corolla! Read on and we’ll explore everything this nascent model offers.

Two trims accompany the GR Corolla: Core and Circuit Edition. The difference essentially comes down to the second one gaining a carbon-fiber roof, hood bulge, and a massive rear spoiler. The gaping grille comes surrounded by chunky trim, while the vented fenders are beefy in keeping with this model’s rally car image. Toyota says that the GR Corolla has added downforce and improved stability thanks to the hood, fender, rear bumper ducts, and a flat underfloor.

Power to the People

Think “three-cylinder” and a whole host of questions may arise. What size is the engine? Is it balanced? What is the performance output? Well, the engine in the GR Corolla has three cylinders, displaces 1.6 liters, and throws down a whopping 300 horsepower and 273 pound-feet of torque. That is an amazing 100 horsepower per cylinder – imagine equivalent power in a V8 engine…

Toyota is not messing around when it comes to driver engagement. The only transmission offered is a 6-speed manual and that’s the right decision. This one comes with a rev-match function to the joy of enthusiasts the world over. No doubt, it will shift smoothly with a clean clutch uptake. We would expect nothing less!

All-Wheel Drive for the Ages

Until recently, Toyota seemed quite shy about offering all-wheel drive with its cars. But that changed in recent years when the midsize Camry and large Avalon sedans gained that option. Sure, it is only offered on four-cylinder versions of both models, but at least Toyota has shared what its crossovers have long offered.

With the GR Corolla, all-wheel drive comes standard. It comes with a normal 60 to 40 front-to-rear distribution, but it can also shift to a 30:70 setting for a rear-wheel bias. Moreover, a 50:50 setting is possible, with power shifting to open differentials. Further, opting for the Performance Package on the standard model (included with the Circuit) is front and rear Torsen limited-slip differentials. Proportional RPMs between the left and right wheels, anyone?

To make this hot hatch live up to expectations, Toyota reinforces the frame with additional welds and structural adhesives. Further, tuned struts up front and a multilink arrangement to the rear are designed specifically for this all-wheel-drive system. With a stance 2.4 inches wider than the standard Corolla thanks to its thick fenders, the GR features Michelin Pilot Sport 4 rubber measuring 235/40R-18 wrapping 15-spoke gloss-black alloy wheels. Slotted 14.0-inch brake rotors are upfront and 11.7-inch rotors occupy the rear. Choose the Circuit Edition and they’re dressed in red calipers sporting the GR logo. 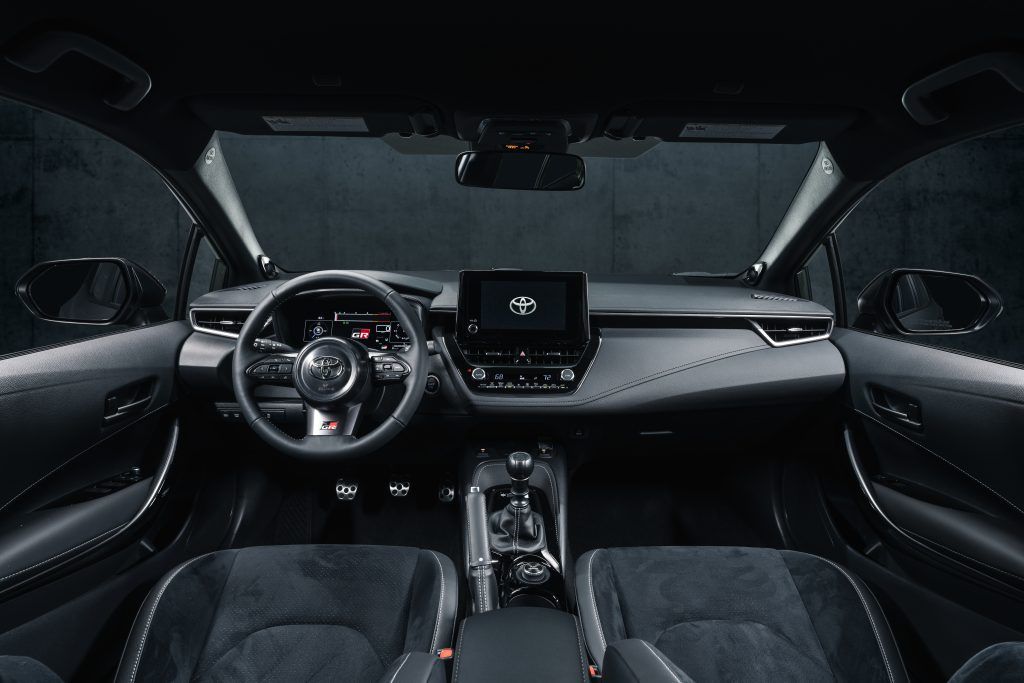 Yes, it is an exaggeration on our part when we describe the GR Corolla interior as mundane. However, in comparison to the many exterior, suspension, and powertrain enhancements, the cabin changes are relatively light.

That said, there are some sporting elements present. Also, it becomes more apparent in the Circuit Edition, which comes equipped with a leather-wrapped steering wheel, a unique shifter, headrest badges, and suede/imitation leather sports seats with red accents. That’s an upgrade from the Core’s cloth seats without the red garnishment. Both trims, though, have a GR-specific performance display set within a 12.3-inch gauge cluster, a short-throw gearshift, and a mechanical parking brake.

On the infotainment system front, the usual features are present. These include multiple charge ports, an 8-inch touchscreen display with “Hey Toyota” commands, and Bluetooth, Apple CarPlay, and Android Auto. A 6-speaker audio package comes with the Core trim; eight speakers with the Circuit. Wireless charging is available.

As for safety features, Toyota’s full suite of driver-assist equipment will be present. These features include automatic emergency braking with pedestrian detection and lane control. Adaptive cruise control, blind-spot monitoring with rear cross-traffic alert, and hill start assist control are other features of note.

Grooving With the GR Corolla

Once again, Toyota is upping its performance game. That they’re doing so with its most popular model of all time is no surprise.

In the GR Corolla, Toyota has a bona fide competitor to the Volkswagen Golf R and the Honda Civic Type R. This model will also receive favorable comparison to the Subaru WRX STI.

All in all, we cannot wait for the GR Corolla to arrive. Ahead of its debut, we will share additional details, including its price. Do you want one?