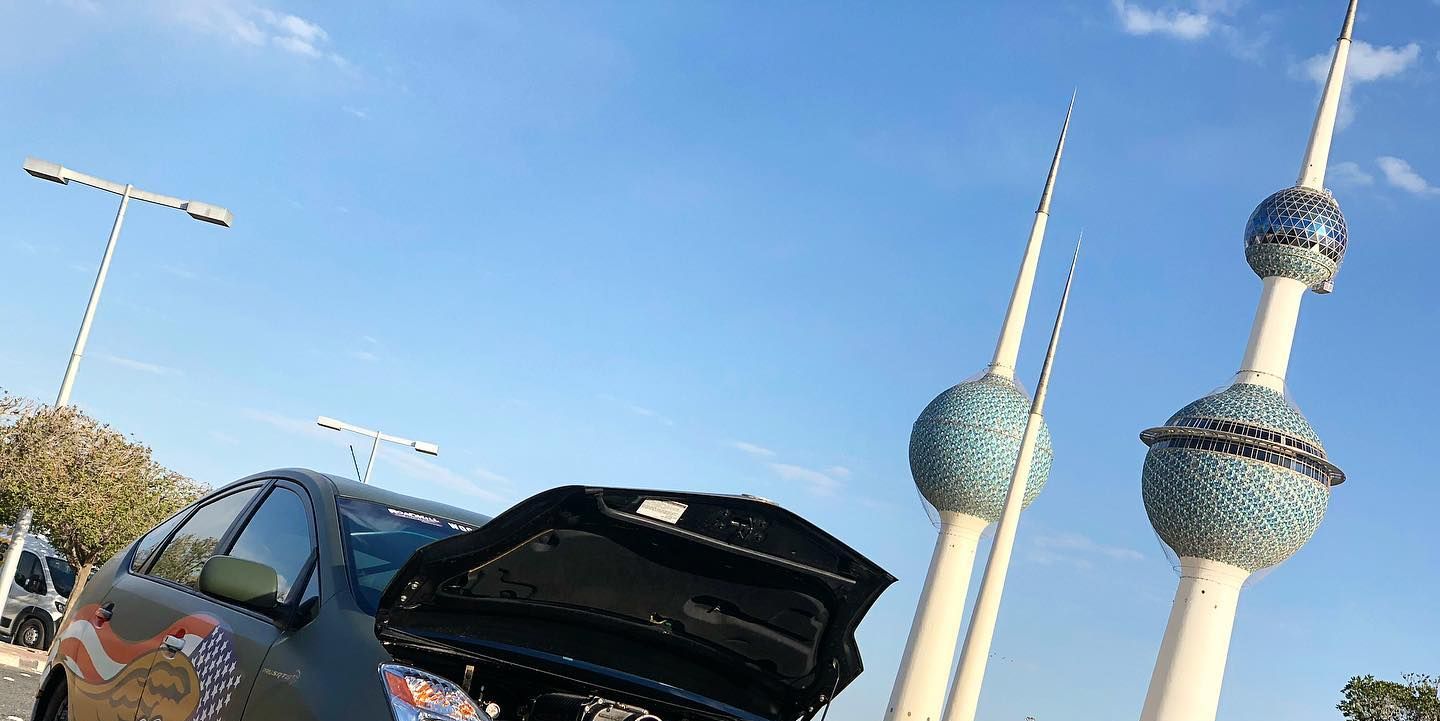 UPDATE 3/25/20: American Racing Headers, the company that built this 717-hp Hellcat-powered Toyota Prius, took it to Kuwait to visit U.S. troops. As the Detroit Free Press reported, Nick and Louie Filippides took the PriuSRT8 to U.S. Army Base Camp Arifjan earlier this year, which Nick said took nine months to plan and cost him $15,000, plus five weeks’ shipping time via boat. We knew you’d appreciate the paint job and the photo above, from the ARH Facebook page, showing the car posed by the Kuwait Towers.

A second-generation Toyota Prius that has been force fed a supercharged Hellcat V-8 turns the whole Prius idea completely on its head. Finished just days before the 2017 SEMA show opened this week, this anti-Prius is aptly named PriuSRT8—a mishmash of Prius and SRT8.

Built by American Racing Headers (ARH), the PriuSRT8 keeps the Prius’s basic shell intact but replaces everything else with hardware that can support a 707-hp-plus V-8 engine. In went a custom ladder frame, a four-link rear suspension, a nine-inch rear axle, a carbon-fiber driveshaft, a six-speed Tremec manual transmission, and a full roll cage.

Because the Hellcat engine on its own wasn’t insane enough, ARH bolted a bigger Whipple supercharger to it. (The engine, by the way, was sourced from FCA, but it isn’t one of Mopar’s new Hellcat crate engines.) In case it isn’t immediately obvious, the Prius is no longer front-wheel drive.

The interior is completely custom, and the back seats were sacrificed to make room for the roll cage. That cuts down on the PriuSRT8’s usability, but it’s not slowing ARH down—a rep told us they plan to daily-drive the thing.

As fans of puns and wordplay, we appreciated the clever badges and stickers ARH had slapped all over its creation: “Weapon of Mass Consumption,” “Fixed in the U.S.A.,” and a “Mean Ass Vehicle” label made to look like a California HOV sticker. The PriuSRT8 badges borrow their font design from Chrysler’s SRT division, and the small “Burns Gas and Rubber” badge on the hatch adopts the look of Toyota’s own Hybrid Synergy Drive button. If we had to guess a motivation behind the project, it would be a one-finger salute to political correctness.

Michael Simari and the Manufacturer