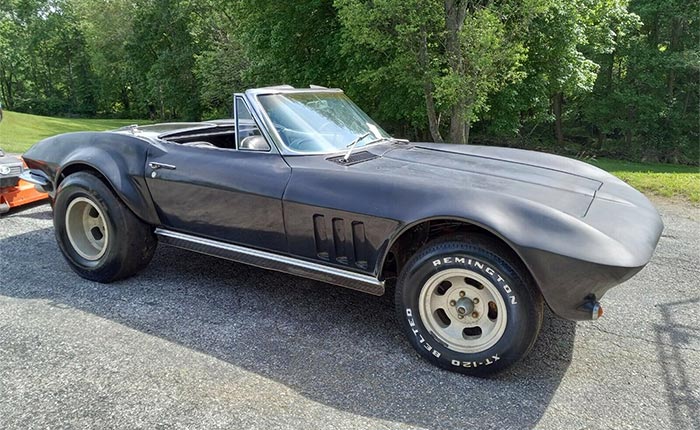 It’s hard not to like a C2 Corvette, even when it’s been sitting in a garage gathering dust for nearly 30 years like this customized Sting Ray that even had boxes of junk piled on it.

The car recently was rescued by a new owner, who acquired it from the family of the second owner who had bought it in 1970 and used it as a street/strip car – hence the big rear slicks, rear fender flares and glassed-over headlights that were common in that era. He eventually gave the car to his son in the 1980s, and he installed a Corvette 1965 date code 327/300 horsepower HO code engine with a Turbo 350 automatic transmission so his wife could drive it, too. 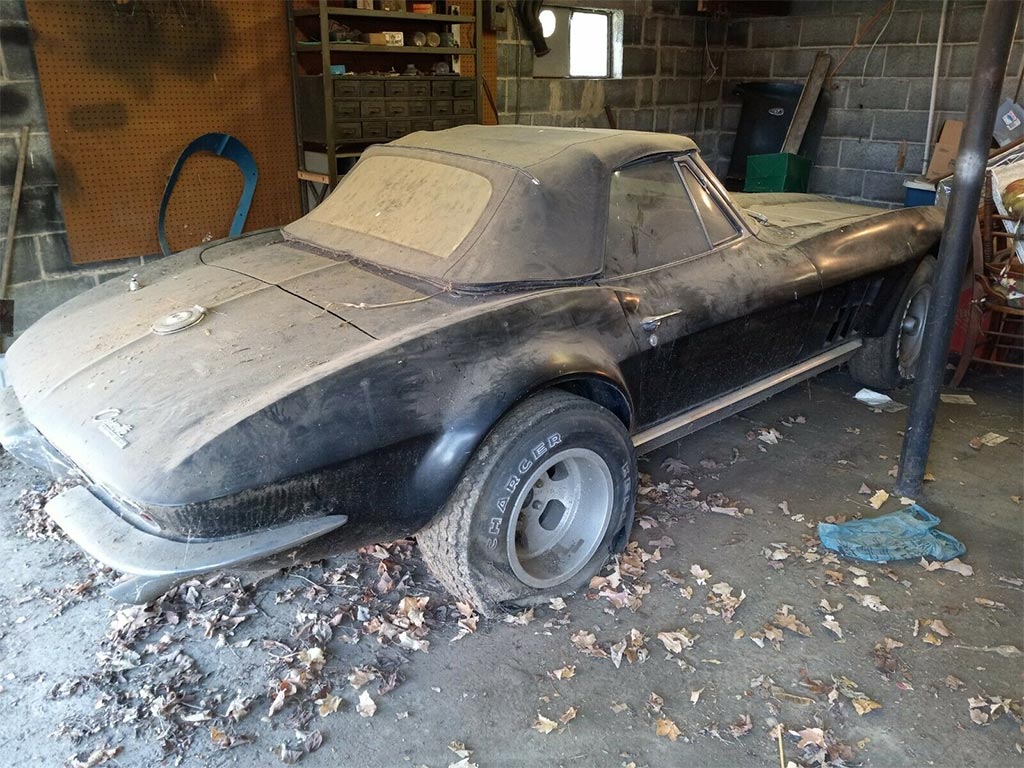 The car eventually wound up being stored inside a garage by 1993, where it had remained until recently and now it’s offered for sale on eBay. Fortunately, that dry storage likely helped preserve the frame, which seems to be in decent shape with only surface rust.

Eager to see if the engine would still run, the seller installed points, condenser, and a coil and it did indeed fire right up using a jug of fuel after priming the motor first – with no smoke or leaks. He described the experience as “unreal,” noting that bird’s nests and more came out of the exhaust when it was first cranked up, but after that, the engine showed 60 pounds of oil pressure and “sounded excellent for sitting that long.” 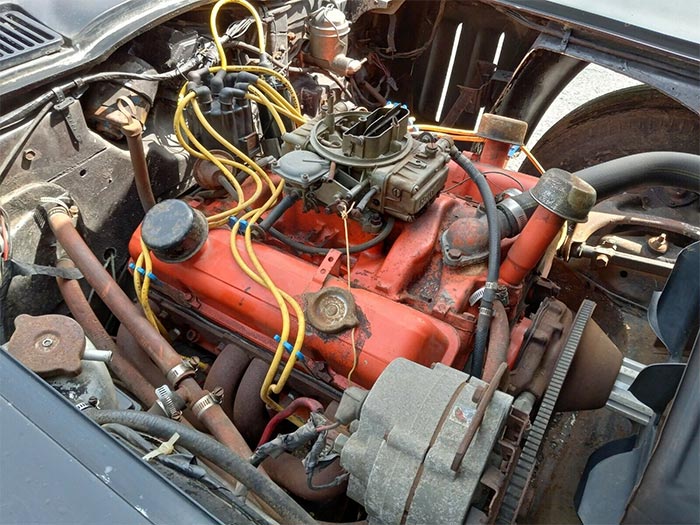 Since then, he’s also installed a new master cylinder and brakes and has a new gas tank ready for a new owner to install. He believes it wouldn’t take much to drive the car as it sits but emphasizes “this is not something you can come and drive around the block just so we are clear … but with a new gas tank, new tires, and a few odds and ends it should be very driveable.”

He believes it would be a good candidate for an LS or LT4 conversion. 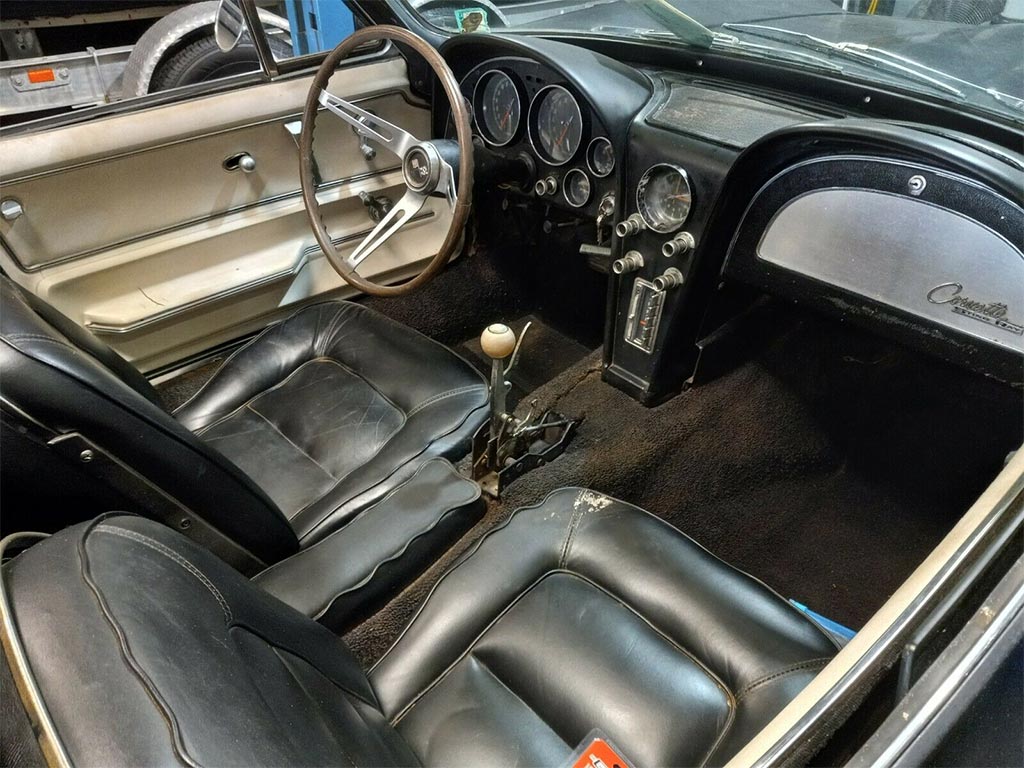 This ’65 left the St. Louis factory in the second most popular paint color that year, Glen Green, with a white interior and black soft top. At some point, though, it was repainted in its current shade of black, and black bucket seats were installed though the door panels remain the original white.

While it’s likely a new owner would want a new paint job, the seller points out that he buffed a small area and “for being done in the ’80s, it shined up amazingly well,” adding “not that it’s gonna make the car but I bet if you wet sanded a little and buffed, it would be a big improvement from the pics.” 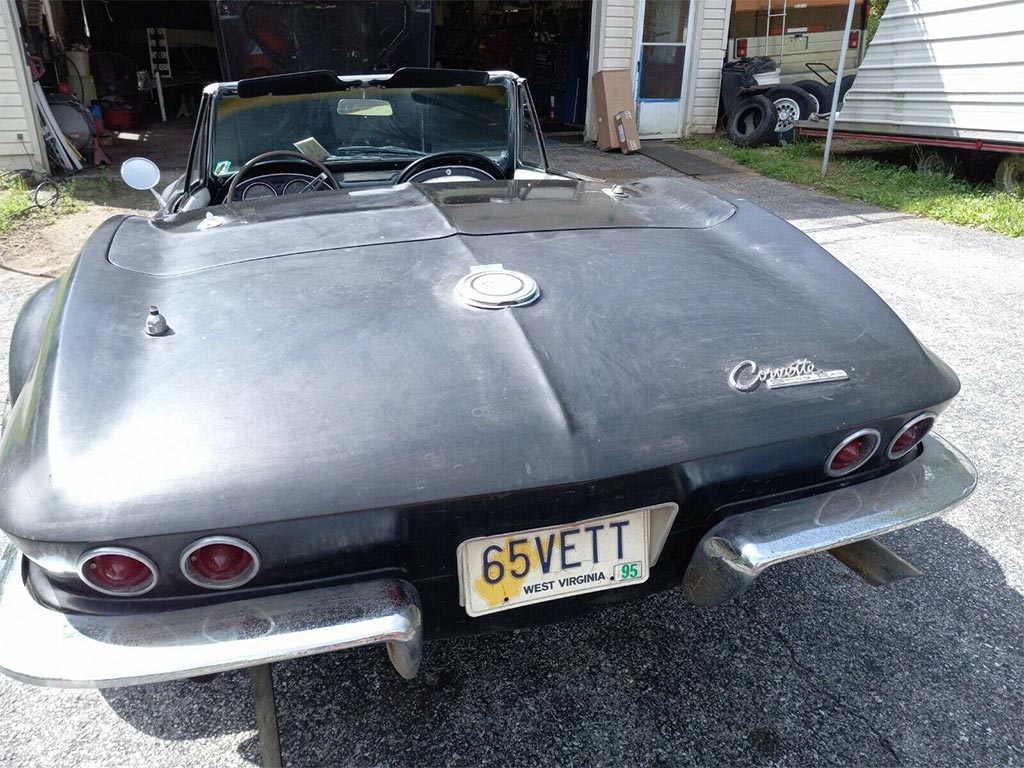 Overall, he says the body isn’t “all cracked up” and features good fit and seams, and the trim is “amazingly well preserved” and just needs a good polishing to look “nice,” too. And “whoever did the flares did a good job back in the day [because] they are not all cracked up like most,” he adds.

In a further note of encouragement, he says that “it’s real easy to pull the body off these Mid Years and do the frame and suspension and paint it unlike most.” 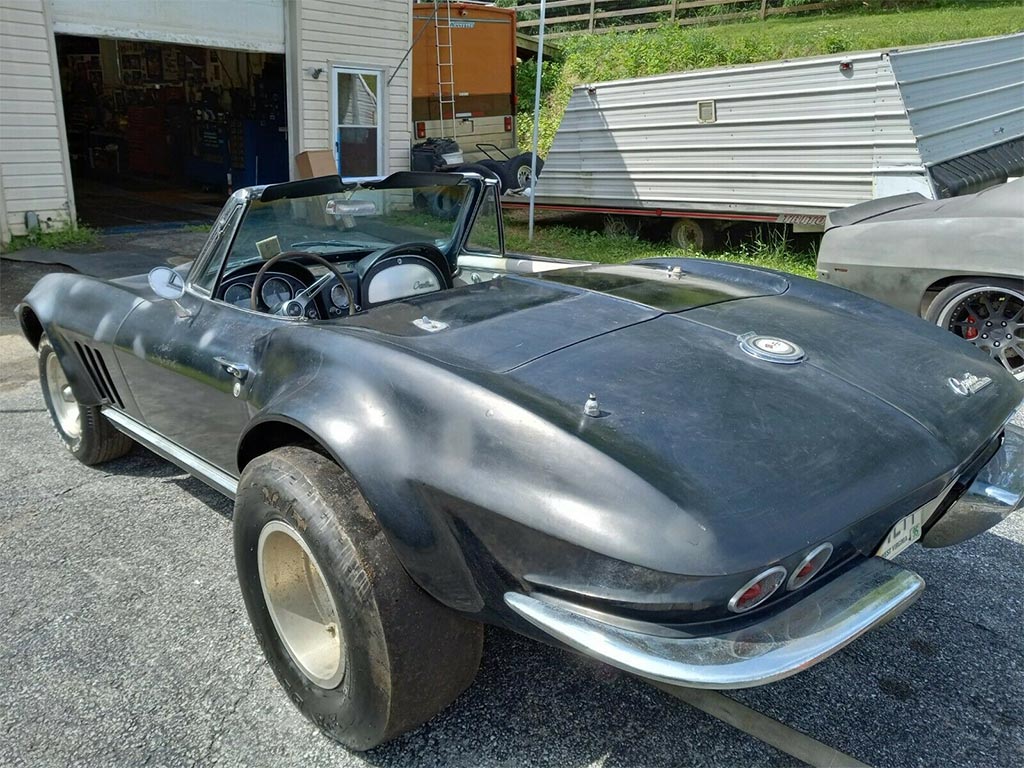 The odometer shows 44,000 miles, which the seller “would pretty much bet anything” is correct.

In an addendum to the ad, the seller points out that the original tinted windshield and the rest of the glass remain in “excellent shape.” While the convertible top frame works “great,” he believes the ragtop is original and needs to be replaced.