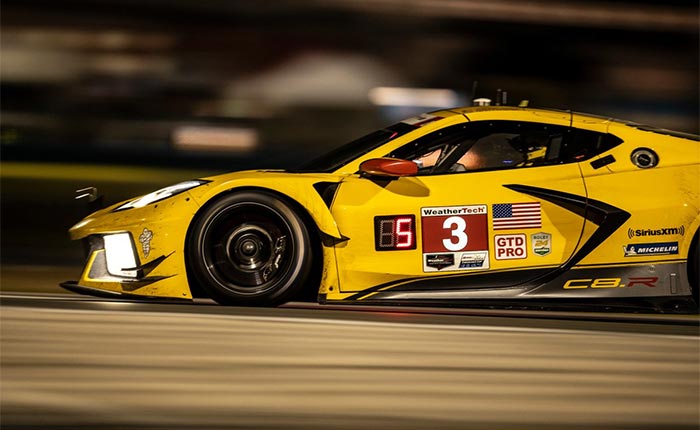 SEBRING, Fla. (March 19, 2022) – Corvette Racing made it a dozen victories in the Mobil 1 Twelve Hours of Sebring on Saturday, the first victory in America’s oldest sports car race for the mid-engine Chevrolet Corvette C8.R.

Antonio Garcia, Jordan Taylor, and Nicky Catsburg teamed for the landmark win with the No. 3 Mobil 1/SiriusXM Corvette in the second round of the IMSA WeatherTech SportsCar Championship. The trio combined to led 247 laps or 913.9 miles for Corvette Racing’s first Sebring 12 Hours win since 2017 and 12th since 2002.

It also marks the first win for the GTD PRO-spec Corvette C8.R in its second race as part of the new class. The result goes along with a runner-up GTE Pro finish for Tommy Milner and Nick Tandy in Friday’s 1,000 Miles of Sebring for the FIA World Endurance Championship. 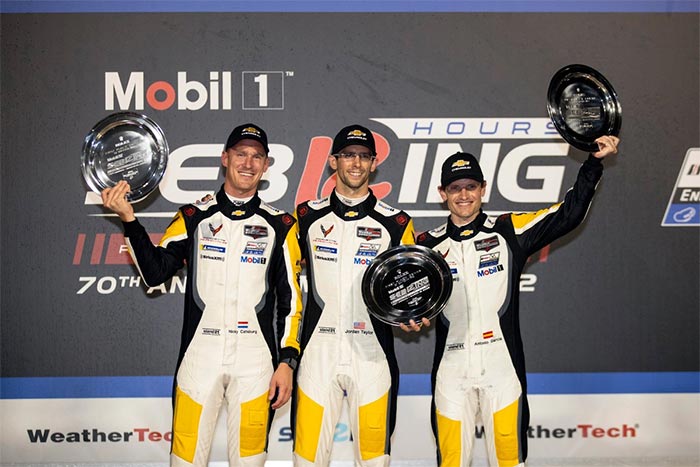 “Congratulations to Antonio Garcia, Jordan Taylor, Nicky Catsburg, and everyone on the No. 3 Corvette C8.R team,” said Jim Campbell, Chevrolet U.S. vice president, Performance and Motorsports. “Winning in class for the 12th time at the 12 Hours of Sebring is the result of great driving, race strategy and execution of pit stops. The Corvette C8.R’s 5.5-liter, flat-plane V-8 engine delivered the right combination of performance, reliability and efficiency throughout the race.

“This win is even more special thanks to the support of so many Corvette owners and fans at the track and around the world,” Campbell added. “This has been a great weekend with a runner-up class finish in the World Endurance Championship on Friday and now this win in IMSA. I’m proud of everyone at Corvette Racing and our technical partners at Mobil 1 and Michelin.” 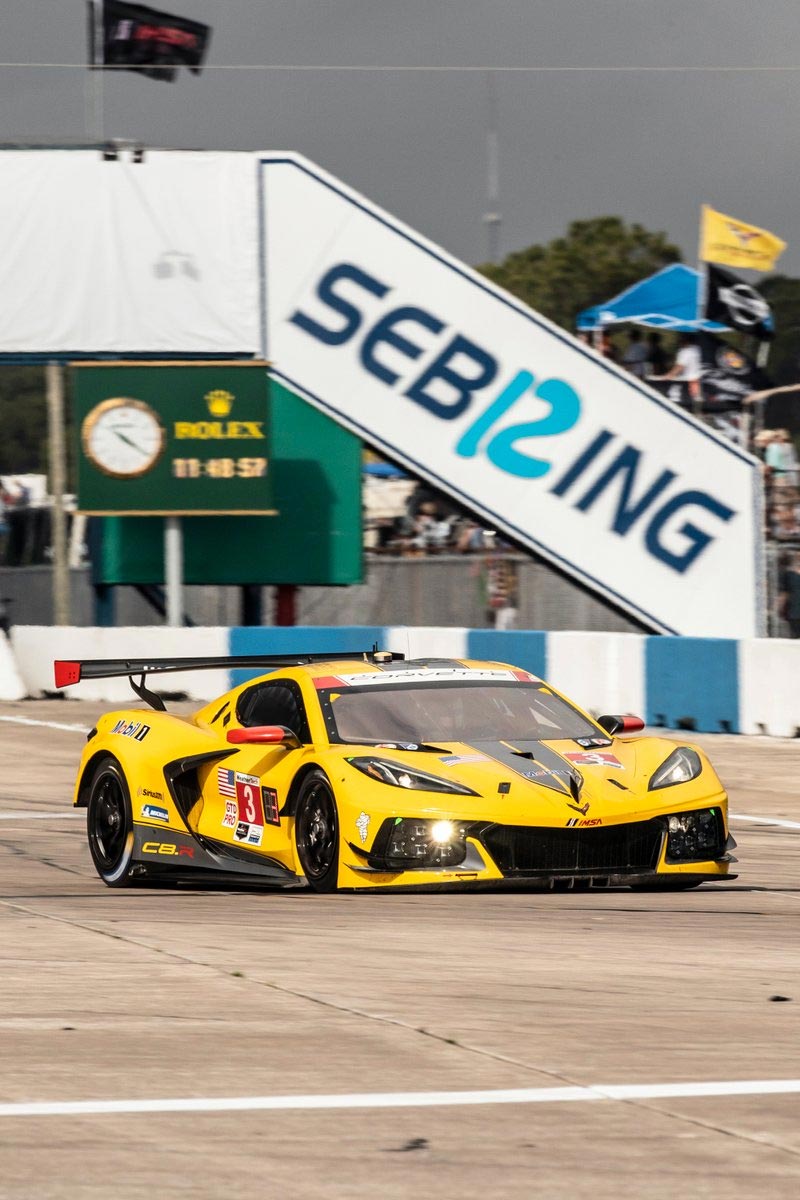 The No. 3 Corvette also won the Sebring round of the Michelin Endurance Cup – a championship consisting of Sebring, the Rolex 24 At Daytona, Sahlen’s Six Hours of The Glen and Petit Le Mans. Points were awarded at the four-, eight- and 12-hour marks.

Corvette Racing wasted little time going to the front in the race. Garcia set the table from the beginning as he advanced from his third-place starting position to the head of GTD PRO. He passed six cars in his opening two hours before handing off to Taylor for an impressive three-hour run.

Catsburg drove an equally stirring three hours, 18 minutes in the middle of the race. He soldiered through four full-course caution periods and enjoyed a highlight-reel battle with Pfaff Motorsports’ Matt Campbell for the GTD PRO lead at the seven-and-a-half-hour mark. The two raced side-by-side for three corners before Catsburg pulled ahead.

That left Taylor to drive one stint before Garcia closed with a triple-stint to score the victory.

Corvette Racing engineers dedicated significant time at a February test to gain a better understanding of the performance and degradation levels of the GTD Michelin tires, which are different than what the team has used in past seasons. That combined with more than 51,000 racing miles across the familiar bumps around the 3.7-mile, 17-turn Sebring circuit was the right combination.

Corvette Racing’s next event in the IMSA WeatherTech SportsCar Championship is April 8-9 at the Long Beach (Calif.) street circuit.

“We had to carry on after Daytona and do all we can. There we didn’t have the pace and little issues we had put us back and out of contention. The main thing here was to stay up front, don’t make any mistakes and have no failures that would set us back. That was the first goal. I was the first guy surprised about our pace. We started seventh and slowly started to make our way through. I wasn’t expecting to be leading after the first stop. I thought our car was the best during the day and when it was as warm as possible. I was a little bit afraid of the rest of the field at night. It seemed like everything was switching on for them, the track would go toward them and maybe all the advantage we had went away a little bit. It was up to us to control the pace and keep the gap. If we had been in a situation to catch another car, it would have been difficult. It was perfectly executed by everyone at Corvette Racing, good strategy and amazing drives by Jordan and Nicky.”

ON 12TH WIN FOR CORVETTE RACING AT SEBRING: “It’s amazing. I said before the race that whenever you come to Sebring in a Corvette, it is always a good feeling. You know something good is going to happen. In the end and having the pace or not having pace, there is still a Corvette factor. It’s the best team to be on when you race here. I’m very happy with that.”

“Daytona was frustrating for us. We lacked pace there and had a mechanical issue in the middle of the night. We learned a lot after that and used it as a test session. That really helped us here. Zero issues around here is a big feat in itself. Twelve hours at Sebring is tougher than 24 at Daytona or Le Mans. It’s a big accomplishment for the team. We won Daytona and the championship last year, so it’s nice to get another major endurance race for the C8.R and start our championship fight again.”

HOLDING THE LEAD THROUGHOUT: “I was surprised how quick we were. I think we were quick in clean air. If we had been stuck behind guys, it would have been difficult for us to get ahead. Once we got to the front, the name of the game was to maintain our track position whether it be saving fuel and extending windows or saving tires. The guys nailed the strategy and kept us out front all day. That’s what really won us the race.”

IMPORTANCE OF FEBRUARY TIRE TEST: “That was big for us. If we showed up here with no test time or setup and development for this track, we would have been out to lunch. Two days here of testing with the guys doing the development and going back and doing their homework really made our weekend.”

“Daytona is a lot about going in a straight line on the banking. This was difficult for us. Sebring was always going to be a bit easier. At the start of the weekend, we really struggled. We got a little break which definitely helped us and brought us back into contention, but it wasn’t easy. Not at all… definitely not. I was struggling on the tires in the middle of the race. It was tough. You never know where you really are until the race. In practice, you don’t know what people are doing in terms of fuel loads, qualifying runs or race runs. It’s difficult to say how much we picked up.”

GETTING THE CORVETTE BACK UP FRONT MID-RACE: “We stuck to our initial plan. We didn’t try anything too crazy. The Lexus and Porsche were going out of sequence but we always stuck to our original plan. It worked out well.”

IMPORTANCE OF FEBRUARY TIRE TEST: “That was huge. It was a huge role. We are still quite new to this tire and to this class. The team had two really good days here. They learned a lot and turned the car around. If we hadn’t done that, we would have had to do it here this week and we probably wouldn’t have won the race. It made a lot of sense.”

Corvette Racing at Sebring: Gaining on Things in GTD PRO

IMSA Sets BoP for Sebring and Of Course More Weight Was Added to the Corvette C8.R