Automotive retail still has work to do to address diversity issues 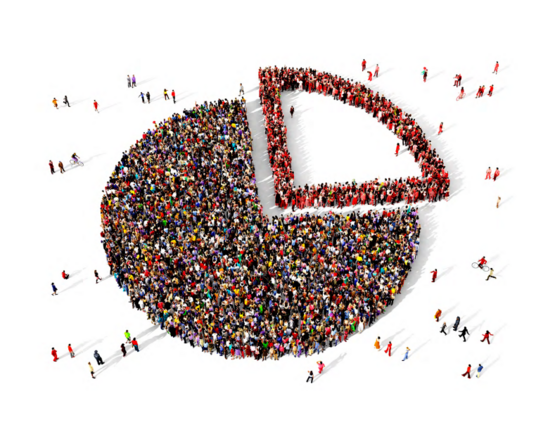 An Institute of the Motor Industry (IMI) report aiming to be the catalyst of a shift to greater diversity, inclusion and equity in automotive has revealed that gender remains the source of the sector’s most significant representation imbalance.

The industry body’s Diversity Task Force assembled experts in working groups focused on physical and nonvisible disabilities, race and ethnicity and gender and sexual orientation to gather evidence and insight to create the report.

And, while the IMI was “surprised” to find that the automotive sector employs a larger than average proportion of individuals with disabilities, its findings also highlighted the significant work still needed to tip the balance of representation.

The Diversity Tasks Force’s research, carried out between May and October last year, identified that 14% of the automotive retail workforce had a disability, with 16% of sales staff and 26% of those working in parts and accessories having some level of disability. 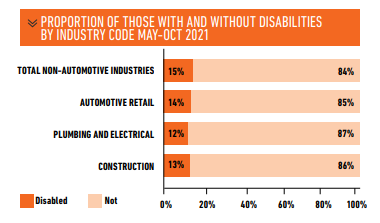 This compared with 15% in nonautomotive industries.

In gender terms, the same data set showed that male employees account for 81% of automotive retail employees, amounting to the sector’s largest disparity in representation, and backing up perceptions that the sector its largely populated by white men. 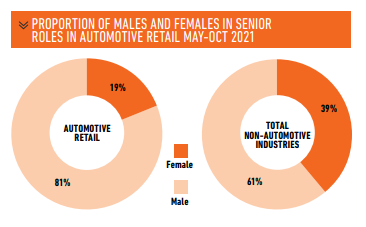 The report said: “In the non-automotive industries, the gender split is 49% males and 51% females. The underrepresentation of females is the most significant of all variables tested.”

Furthermore, the report identified that the issue of diverse representation became particularly critical the higher up the pay grade. 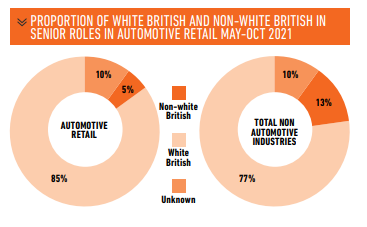 There are also just 19% of women in senior roles in automotive compared with 39% in non-automotive.

However, there are proportionally more disabled individuals in senior roles in automotive retail (15%) compared with those in senior roles outside of automotive (12%) when taking into account hidden disabilities such as dyslexia, ADHD and other areas of neurodiversity.

Automotive 30% Club founder Julia Muir, who served as the gender and sexual orientation working group’s industry expert, said: “One of the aims of the Diversity Task Force was to broaden the discussion beyond gender. I hope that the findings bring the focus back on to gender.

“The report gives some really simple, easy-to-implement recommendations which aim to cut bias and discrimination which, if implemented, should see a greater female representation in the sector introduced in tandem with greater diversity from a broader perspective.”

IMI president professor Jim Saker, who was inspired to launch the Diversity Task Force in response to feedback to one of his monthly columns in AM, said: “The task force set out to understand how the sector can be more attractive to work in for all individuals.

“We wanted to understand what groups are under-represented and what the experience is like if you are Task force identifies notable imbalances in terms of gender and ethnicity not part of the majority so we can bring the issue of diversity and inclusion to the top of the agenda for automotive businesses.

“What has been particularly striking is that the lack of diversity – which, unfortunately, is already poor in our sector – becomes even more pronounced the higher up the pay grade.

“Without diverse role models the sector will struggle to attract the talent we urgently need as we face the biggest skills shortage for more than 20 years.”

According to the IMI, automotive vacancies are at their highest level for 20 years – at more than 23,000 – accounting for approximately 4% of the workforce.

It said that a more diverse workforce As critical to turn the tide and the lack of role models is a fundamental barrier to achieving that goal.

Ensuring the sector is made to appeal to a more diverse talent pool is also vital.

In its comments on diversity, submitted to the report, Jardine Motor Group said: “Based on our external research in 2015, just 2% of women identified automotive as an industry where they could progress a career with 31% of those surveyed referencing automotive as a ‘macho’ environment.

“While the research was in 2015, we believe these perceptions remain.”

“That change needs buy-in from senior leadership. Each of the working groups also calls for the industry to openly share more data on the make-up of the workforce to provide the benchmark to reflect on and measure against.”

As part of its report, the Diversity Task Force has published a five-stage call to action for automotive employers (top right) to engage with the task of diversifying their workforce alongside a series of more in-depth recommendations from each of its working groups.

A reverse mentoring scheme – as pioneered by accountancy firm KPMG – was recommended by the race and ethnicity working group, meanwhile.

This would see employees with black heritage paired with those working at more senior levels to help them understand the workplace challenges faced by people from diverse backgrounds.

As well as publishing its new report, the IMI indicated it would be partnering with organisations and businesses to help further their diversity, inclusion and equity ambitions. It may also host Dragons Den-style annual competitions to come up with new industry initiatives to promote diversity in the sector.

Woolley also advised that automotive employers start to “openly share more data on the make-up of the workforce to provide the benchmark to reflect on and measure against”.

IMI chief executive Steve Nash said: “The work of the task force has clearly identified changes that need to be made by the sector, but it has also challenged our own perceptions and work practices.

“At times it has been uncomfortable, but diversity and inclusion are of strategic importance to us, and so we have already made changes to the way we work and will continue to make more.”

Strategic importance: signal your commitment to the whole business by putting diversity and inclusion on every board and senior leadership team agenda.