Kia recently launched the 2022 version of Seltos SUV in the market. The SUV was launched with some cosmetic changes and feature updates. Kia is also offering the SUV in two new colours – Sparkling Silver and Imperial Blue. The SUVs have already reached dealerships and the delivery for the same has also started. In the past we have seen videos of Seltos modification. Here we have one such video where a brand new 2022 Kia Seltos base HTE variant in Sparkling Silver shade has been completely modified into a GT Line version. What all the changes? Let’s check the video to find out.

The video has been uploaded by VIG AUTO ACCESSORIES on their YouTube channel. In this video vlogger shows all the modifications that were made to the base variant Seltos to convert it into a top-end variant. Most of the parts replaced in this Seltos are actually genuine Kia parts. Starting with the front, the original grille on the HTE variant has been replaced with GT Line grille and it come with all LED headlamps, LED DRLs that extend to the grille, ice cube shaped LED fog lamps and even the bumper has been replaced to give it a GT Line like look.

Also read: Locked out of Kia Seltos: Service centre breaks glass to enter inside the car

Coming to the side profile, the steel rims on the base HTE variant were removed and replaced with dual-tone 18 inch units from Seltos X Line. Just like at the front bumper, lower door beading on the Seltos gets a Red accent. The base variant gets turn indicators on the fenders. This has been removed and a chrome cover has been put on that place. The ORVMs on this Kia Seltos was replaced with a higher variant unit which comes with integrated LED turn indicators and electrical adjustments. Roof rails have been installed and lower window chrome garnish and chrome door handles can also be seen. At the rear, the tail lamps are now LED units and the rear bumper along with the chrome garnish between the tail lamps have also been replaced. 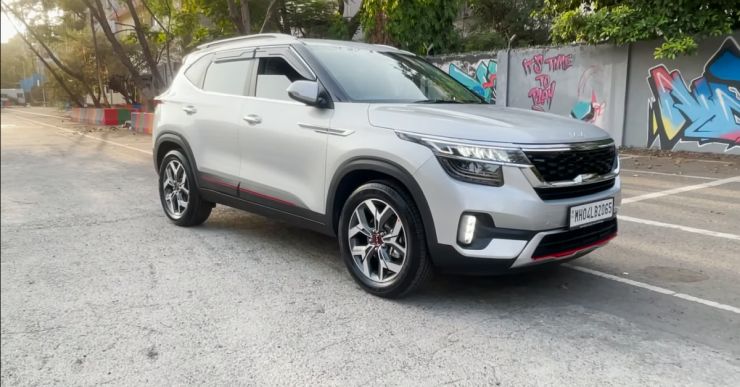 Windows and windscreen on this Kia Seltos gets high heat rejection clear films installed on it. The interiors on this Seltos have also been customised. The basic interior in the base variant has been customised like GT Line variant. The door pads get leather wrap on them. The switches to control the ORVMs are also placed on the door panel. The fabric seat covers in the car have been replaced with all black leatherette upholstery with Red stitching just like GT Line. The steering has also been wrapped in leather with Red accents and there are cruise control and buttons to control the infotainment system.

Dashboard on this Seltos also gets leather wrap with Red stitching. The company fitted music system from the Seltos has been replaced with an aftermarket touchscreen infotainment system. The screen also shows feed from the rear parking sensors. There are ambient lights installed in the car and floor mats have also been installed. Overall fit and finish of the work done on this Seltos looks good and the car does not look like a base variant anymore.