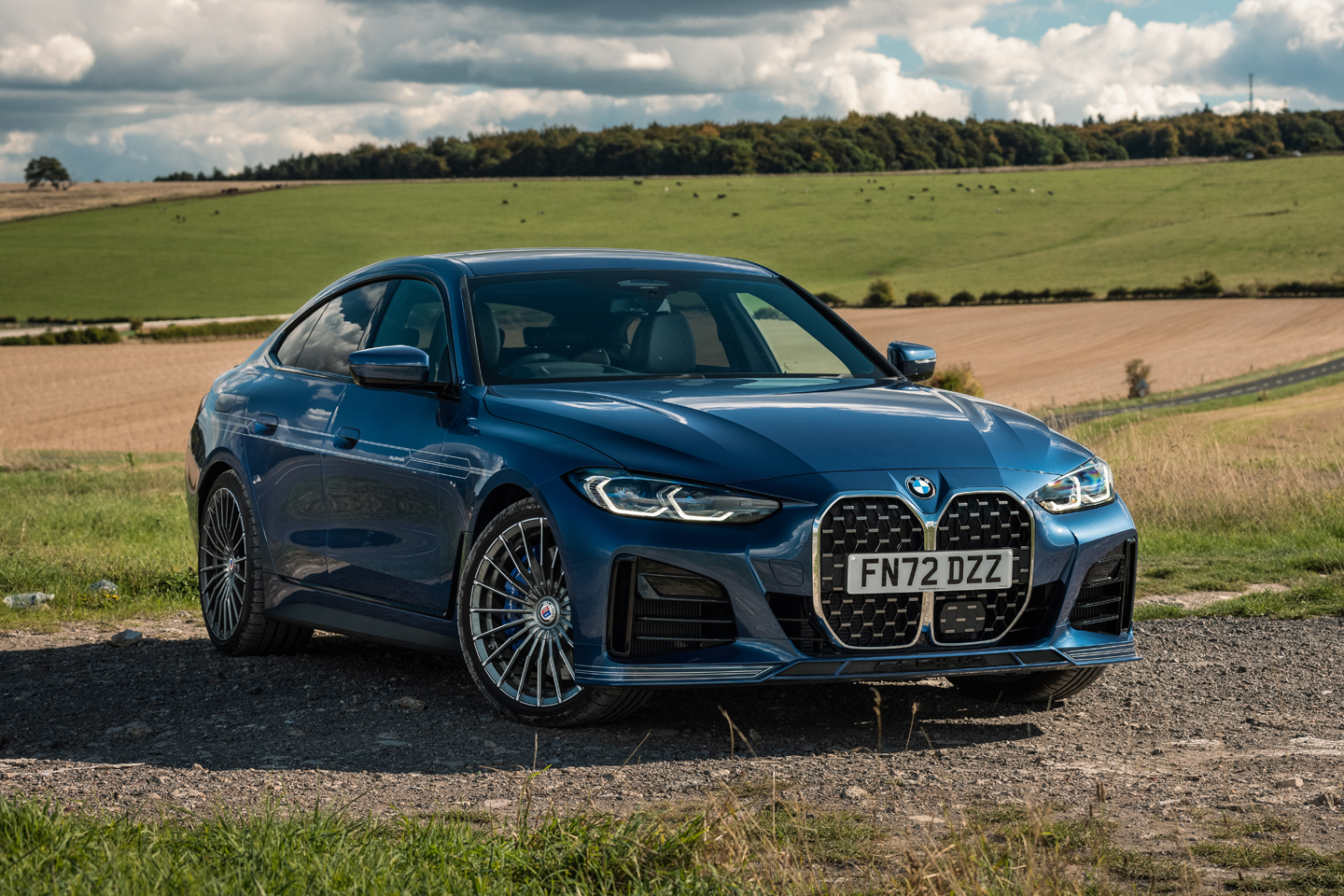 One small mercy of Alpina’s impending assimilation is that it will no longer have to fret about the increasingly wacky designs emerging from BMW. Beauty, as ever, is in the eye of the beholder, but you worry for the sanity of anyone tasked with making the incoming XM appear more desirable. Sills and stickers just ain’t gonna do it. We can be certain about this not just because of the scale of the task, but because Alpina has struggled with the much smaller hurdle presented by the new B4 Gran Coupe. Without wishing to get bogged down (again, for the umpteenth time) in Grillegate, it is very difficult to reverse park the new model and find yourself looking back at it with satisfaction. And invoking a feel-good glow is traditionally Alpina’s calling card.

This is doubly unfortunate because it will likely run counter to what you felt while driving the Gran Coupe. It is also a problem for a car which is meant to be trading on its sleeker appearance versus the more conventional B3 – a model you certainly won’t have forgotten retains a more traditional take on the BMW front end. Moreover, it’s a just crying shame. Because away from the silver-framed nostrils, the GC mostly succeeds in its design brief. The tapered roofline is more pleasing than the one on a 3 Series – especially when it’s tapering to meet Alpina’s modest spoiler, and the visual counterweight of the new diffuser and quad tailpipes.

As ever, bespoke 20-inch wheels do it no harm either. These have been subtly redesigned for their latest deployment, but the effect is much the same – i.e. helping the BMW above to hunker down on its arches. The implicit sportiness is obviously par for the Alpina course, though you could argue it’s all the more crucial here because the B4 Gran Coupe is charged with filling one of the few niches untapped by BMW. Munich will certainly build you a very quick GC in the 387hp M440i, but there appears to be no question of it ever attaining a bonafide M badge. Accordingly – and in obvious contrast to the B3 – if you want a GC with M-grade performance, you’ll have no choice but to knock on Alpina’s door. 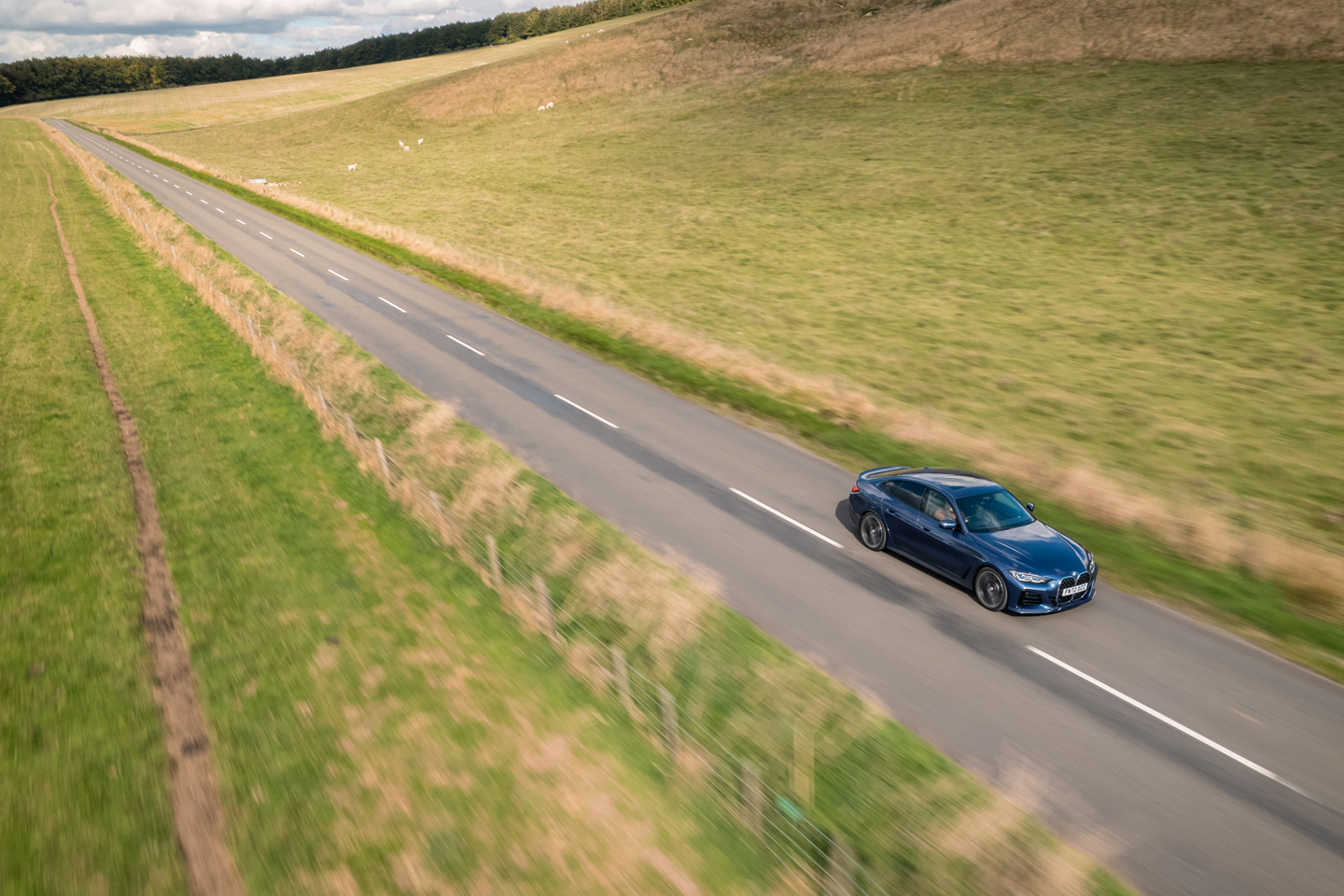 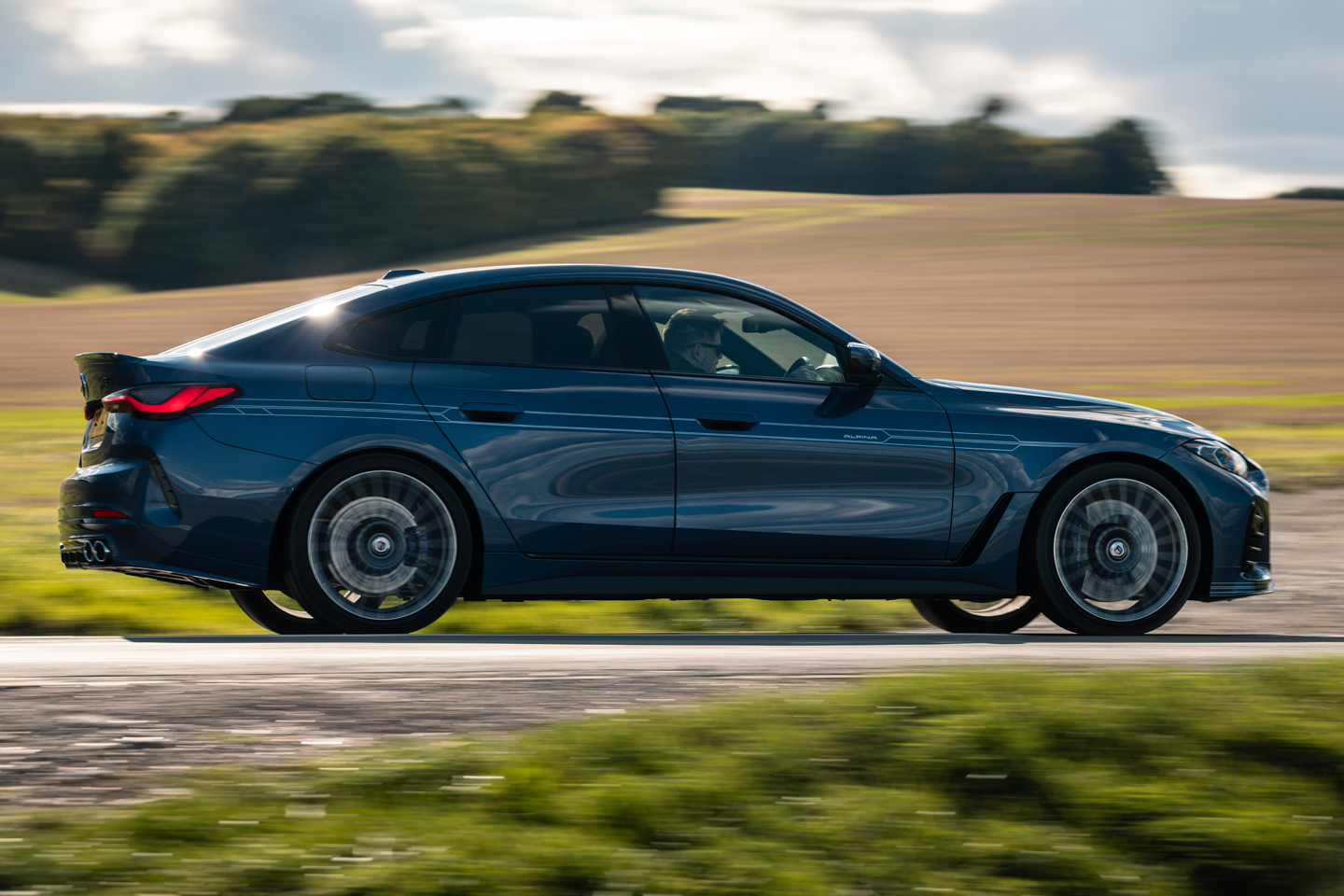 First-world problems, eh? Away from the divisiveness of the front end, there is precious little to be picky about. Indeed, the GC finds Buchloe in a rich vein of form, and there’s hardly any question of its status as a prestige product. Granted, we haven’t quite forgiven the naff digital dials or Alpina’s decision to turn them blue for its purposes, and the standard BMW gear lever will likely be a disappointment to anyone with working experience of the larger, shapelier, we-mean-business shifter you get in the current M car lineup. But you’d be forgiven for thinking the former works better with the tuner’s ‘walk softly’ approach.

The accompanying big stick is familiar. The GC might be based on the M440i, but it shares the B3’s straight-six, which, of course, means it shares the current M3’s straight-six. Unlike previous iterations of the B3 saloon and Touring we’ve driven, the B4 gets the turbocharged 3.0-litre motor in its newly breathed-on configuration, meaning that power has now climbed to 495hp. For those keeping score, that’s just 15hp shy of the M-branded version. In torque – typically Alpina’s key metric for real-world performance – the B4 now eclipses its more famous sibling: there’s 538lb ft of the stuff on tap from 2,500rpm. Accordingly, and in conjunction with standard-fit xDrive, its maker is confident the quickest GC will deliver 62mph in 3.7 seconds and muscle its way to 187mph – well beyond the M3’s limiter.

In driving, when pressed, it feels good for those numbers. Indeed, partnered with the bespoke software Alpina applies to the eight-speed ZF auto, you could hardly want for more. Nevertheless, as ever, raw speed is only one facet of the Buchloe conjuring act, and it doesn’t necessarily hog the dynamic limelight. That’s the M car’s bag. The B4, by inclination and design, is a quieter and more impassive presence. It is content to be driven extraordinarily quickly, of course – yet its overriding aim is to ensure your contentment, no matter what attack posture you’ve adopted. Not unlike the B3, it does this conspicuously well. Virtually no matter the backdrop. 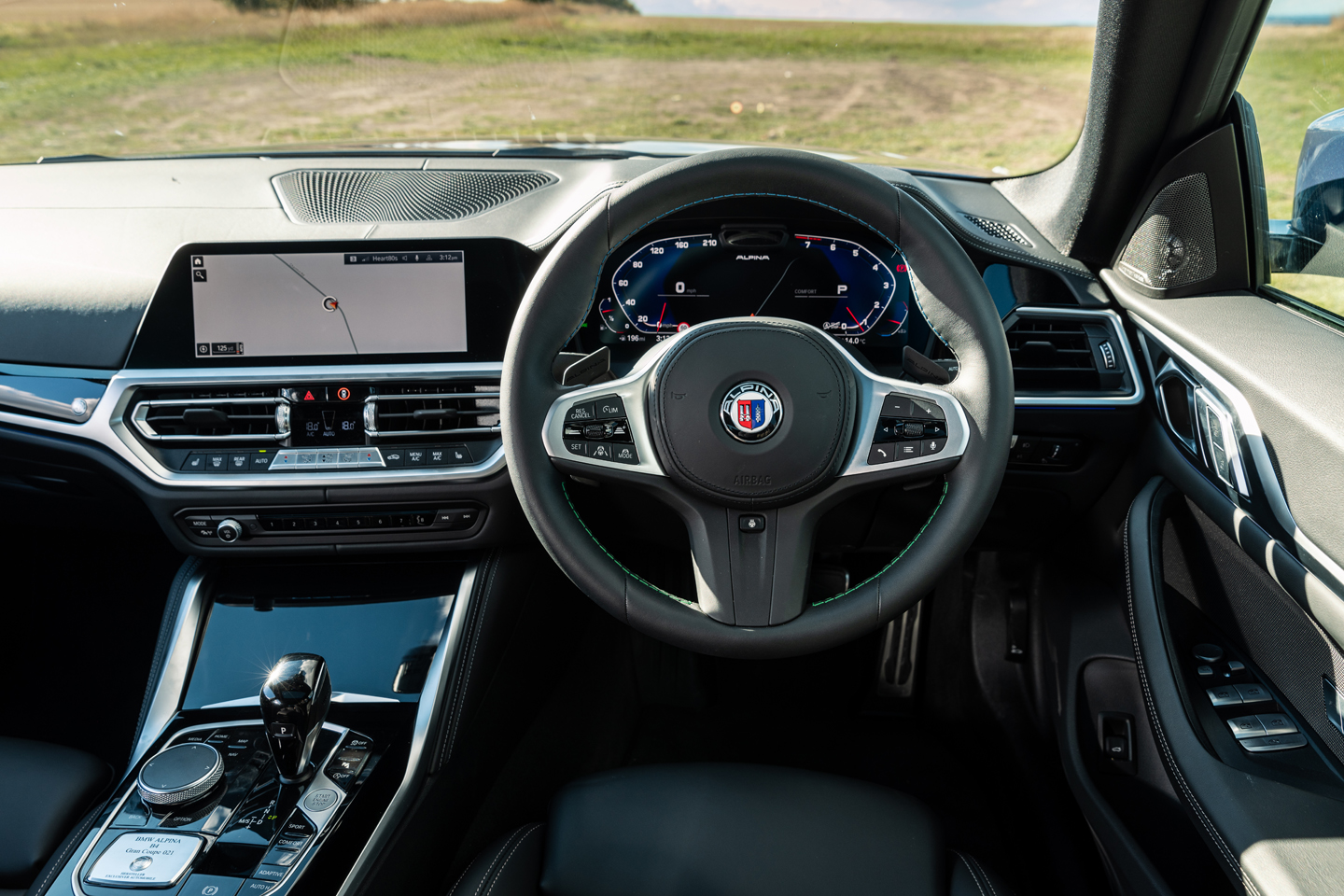 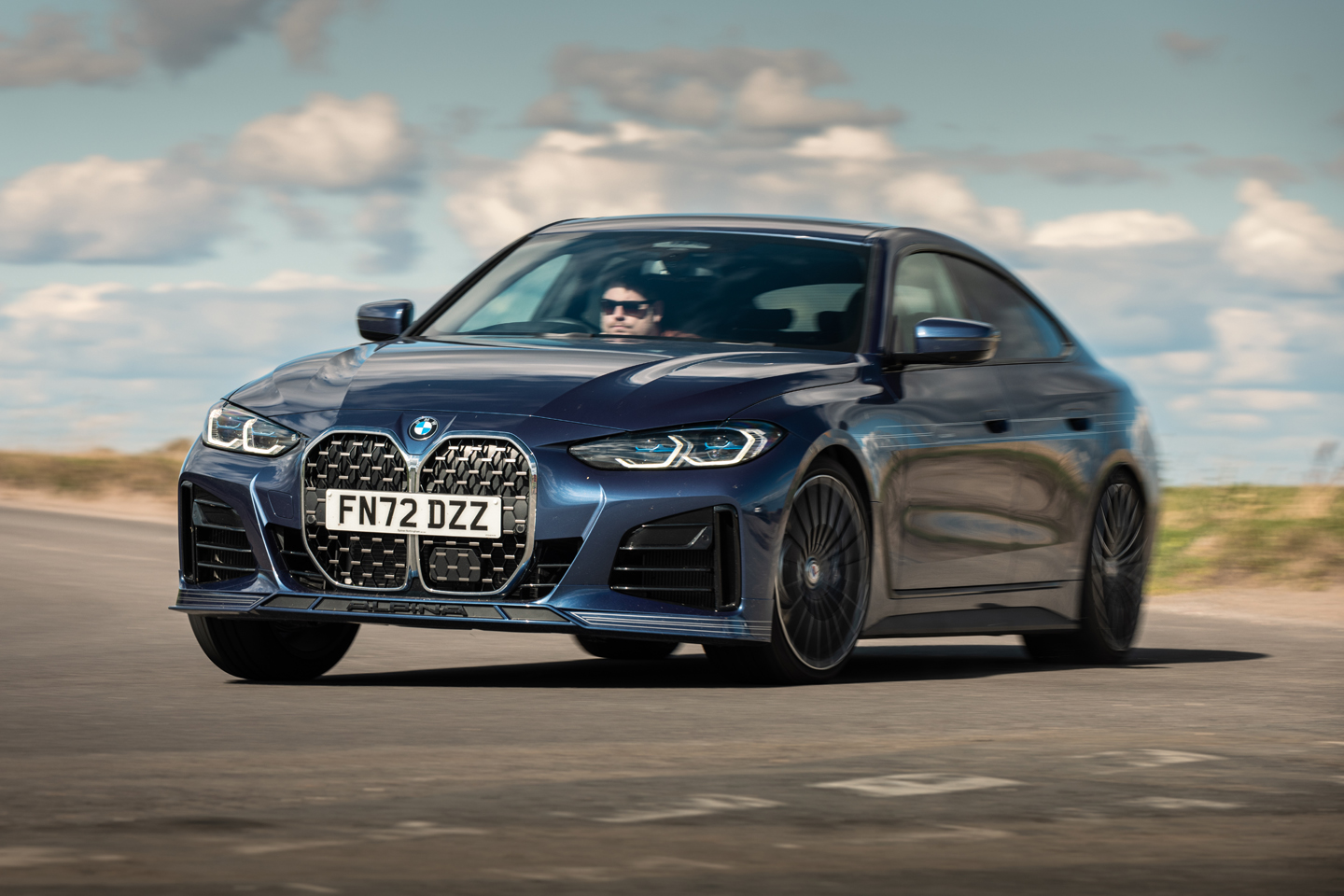 The (open) secret is in Alpina’s beautifully struck compromise between ride and handling, one that significantly outdistances the already admirable quality of the M440i GC. The B4 defaults into its ‘Comfort’ drive setting, and you’ll seldom find a compelling reason to leave it. Nor will you find cause to query the mode’s description: even without triggering its unique ‘Comfort Plus’ mode, the GC is pliant to the point of serene, removing all but the sharpest edges from what would otherwise be jarring intrusions. It is a cheering experience for any fan of dramatically large alloy wheels, but Alpina’s coup de grâce is to stop handsomely short of limo-grade cushioning, so as not to risk a meaningful relationship with the road surface.

The emphasis on poise is predictably rewarding. The GC is more precise than it is playful, yet the temptation, gleefully enticed by the chassis, is to press on almost everywhere with abandon. At any halfway sane speed, the B4 simply absorbs whatever punishment is meted out, and then, courtesy of significant structural bracing and additional negative camber at the front end, funnels it back to the driver as unflappable, and wonderfully intuitive control. Aided and abetted by an engine always straining for a starring role, and the ever-attentive xDrive system, the GC makes a persuasive case for itself as a consummate ground coverer.

With 1,965kg to marshal, you inevitably approach the limit of all this composure at some point – quick elevation changes on very challenging roads will finally have you seeking out the suspension’s firmer setting – but it’s very easy indeed to stay in the B4’s expansive comfort zone, not least because you’ll already be travelling much faster than any adjacent traffic. If there is something the car does lack, perhaps somewhat counterintuitively, it’s an engine-based fire and brimstone setting. That it cannot ultimately rival the M3’s sharper change of direction is as foreseeable as it is redundant, but a case could be made for inducing a livelier acoustic from the otherwise ferocious straight-six. The unit has never qualified as sweet-sounding, and while some might consider the GC’s muted tones in keeping with the car’s broader character, it surely wouldn’t hurt to have something more stirring in its repertoire. 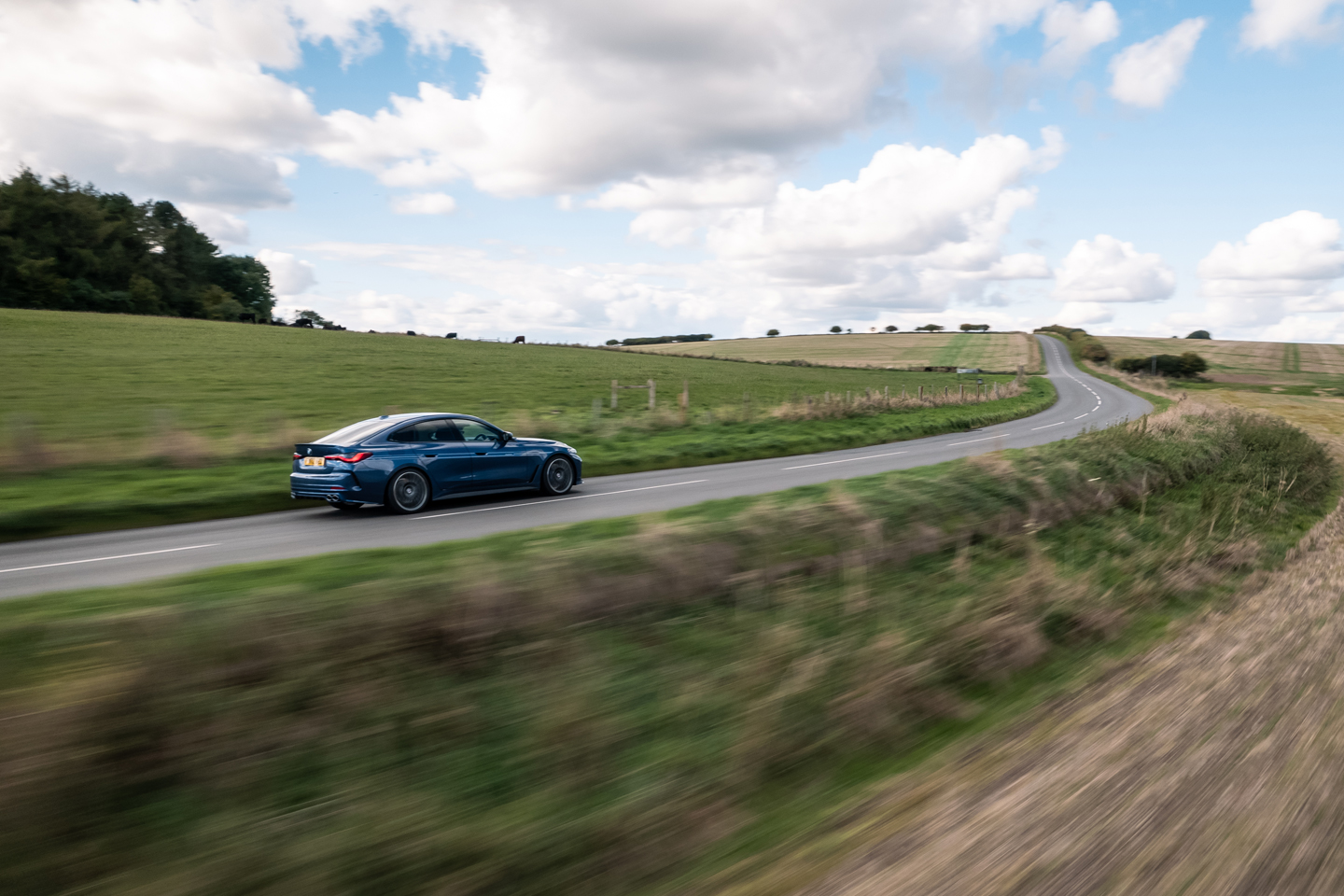 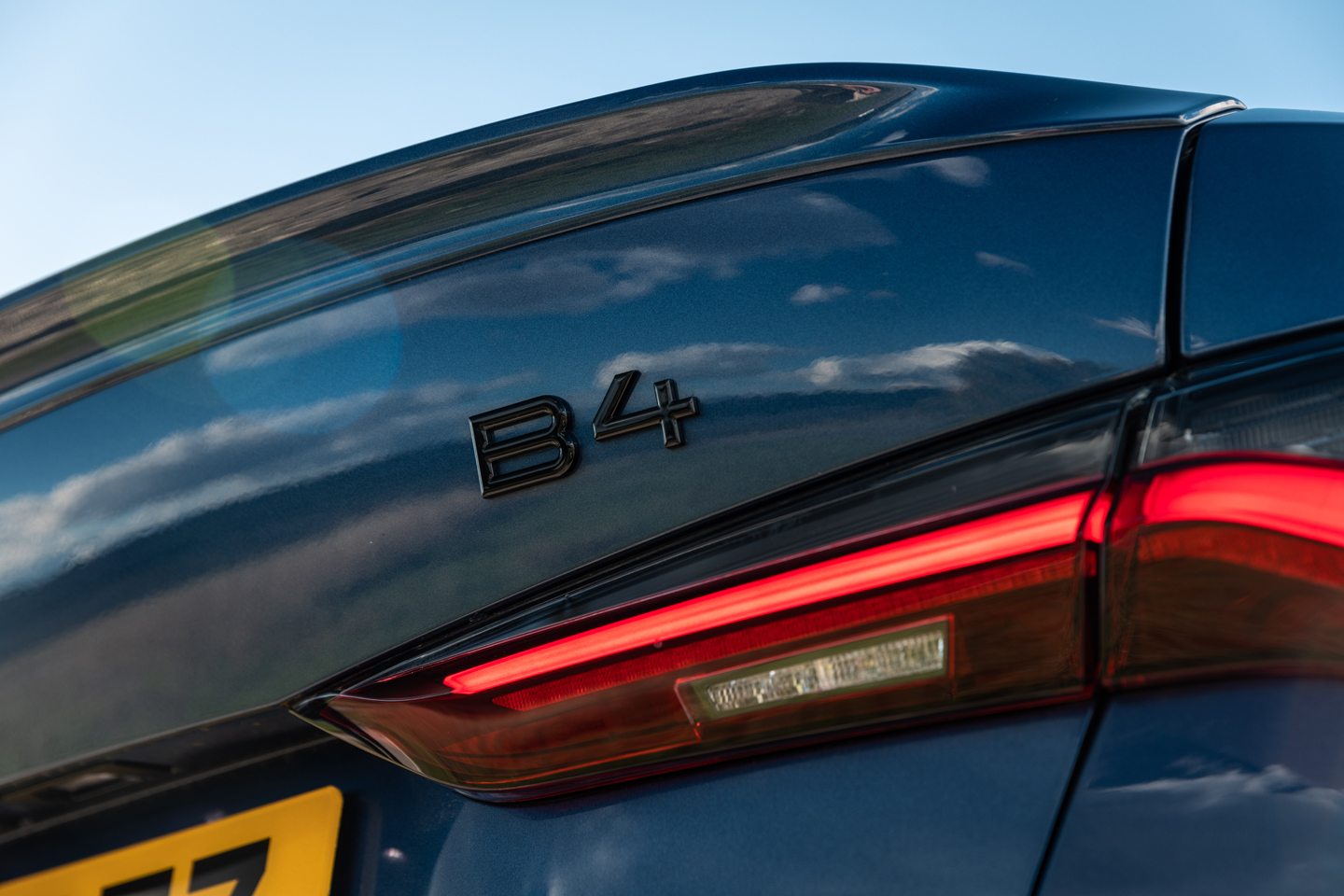 Furthermore, without wishing to pull on the wispiest of threads, the B4 could also use a modicum more subtlety in the tuning of both its accelerator and brake pedal. The former, as conductor of so much peak twist, could do without the hasty response that sometimes arrives when it thinks you’ve requested ludicrous speed. Similarly, a car with the GC’s implicit understanding of its occupants’ wellbeing should not be levering heads from headrests every time a complete stop is called for. Scant criticism perhaps, but noteworthy in something so cohesive elsewhere.

Any other misgivings about the B4 tend to arise not from the car itself, but from what’s around it. Even brand devotees would have to concede that a £79,900 starting price is on the steep side; leaving aside the saloon, the incoming BMW M3 Touring – a car pre-endowed with considerable hype – costs just £3,570 more. True enough, it’ll be a different kettle of fish, and most Alpina buyers will have actively rejected the option of buying an M car – nevertheless, for the GC to really pass muster, it probably needs to eclipse the gravitational pull of the best-selling B3, and that’s a big ask with the latter primed to receive the B4’s lustier output for a (marginally) lower asking price. Added to which, both saloon and Touring specialise in the quintessential glow the GC fails to sustain once you’ve stepped outside. A subjective shortcoming, yes – but very probably a far-reaching one.