Sebastien Bourdais is going for his third victory at the Mobil 1 Twelve Hours of Sebring Presented by Advance Auto Parts and is off to a good start with a pole position for him, Renger van Der Zande and Ryan Hunter-Reay in the No. 01 Chip Ganassi Racing Cadillac.

Last year his victory for JDC-Miller Motorsports came down to pulling the car to the finish with a broken wing. Naturally, he’s hoping for a similar result with less drama this year, but knows the race is unpredictable.

“It’s kind of funny because you would think, ‘Oh, well, it’s the same kind of format and the race has been going on for a long time,’ but I can’t remember a single time where the race has played out the same way,” he said. “I can’t really tell you how this is supposed to pan out, but there’s no better place to start.”

Still he definitely has an idea of what to expect, and what it’s going to take to win.

“It’s just do the best you can, try and stay out of trouble as usual and see how things pan out,” he said. “I think Renger was really really happy with the car; it’s a bit on the nose for me, but he’s planned to finish, so whatever he wants we’ll survive with during the race and then position ourselves for the shootout at the end.

“You need to execute, make sure that you run trouble-free mechanically and the drivers are error-free, and then you don’t get caught up in some kind of traffic, because we’ve seen in Daytona the one field of GT with the same regulations, 28 cars nose to tail, it just doesn’t give you any leeway. So you’re always managing multiple cars at a time, especially after starts and restarts. It’s quite difficult to manage, because they’re obviously all pushing really, really hard and doing their own race, so you have to be really careful, but at the same time, you can’t be too defensive because when you’re defensive, you tend to get hit as well. So it’s just that aggression level, where you set the bar, that is quite difficult to gauge.”

Supplying tires to the entirety of the IMSA WeatherTech SportsCar Championship field (53 cars), as well as the IMSA Michelin Pilot Challenge (45), Porsche Carrera Cup (43) and the majority of the World Endurance Championship field is a tremendous undertaking. In all, Michelin is providing tires for 163 cars for the Super Sebring weekend. Michelin has brought 15,000 tires in all, including 4,500 wets. 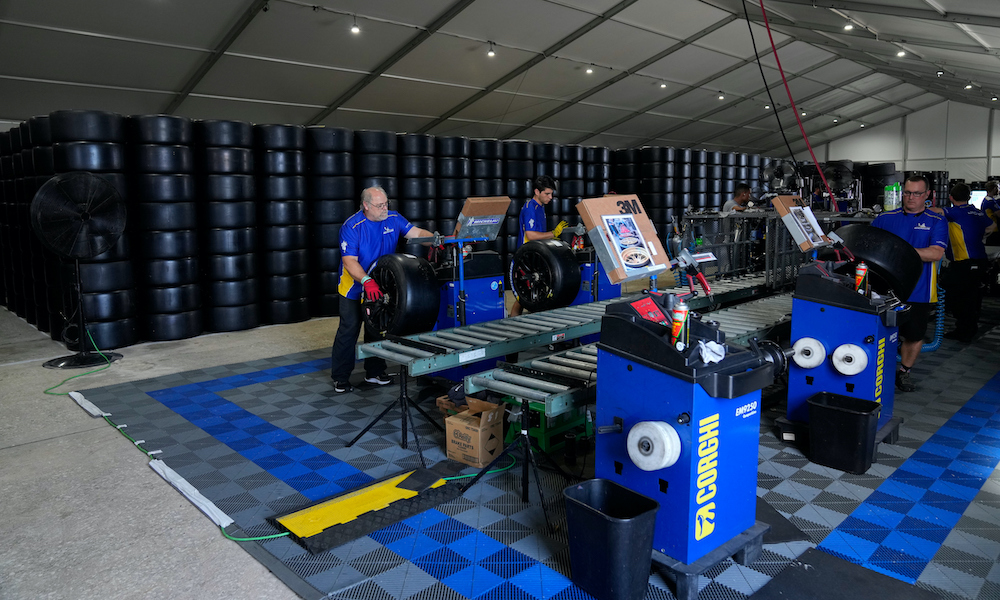 That means setting up a 24,000-square-foot tent that’s been at Sebring International Raceway since March 1. Inside that tent are 10 tire mounting machines, 10 balancing machines, five inflation cages, 340 feet of roller tracks, plus two 100 kilowatt generators and three 375CFM air compressors to make it all work. A staff of 28 people are controlling the inventory, mounting, balancing and delivering tires to the teams.

Many drivers are doing double-duty at the Super Sebring weekend, racing in more than one of the series in competion –the IMSA WeatherTech SportsCar Championship, the World Endurance Championship, Michelin Pilot Challenge and Porsche Carrera Cup. But one driver is doing double-duty of a different sort: entertaining the fans in the infield before entertaining them on the track on Saturday.

Tristan Nunez, driver of the No. 31 Action Express Racing Cadillac with Pipo Derani and Mike Conway, is part of a band that will perform Friday night at Sebring International Raceway.

““The band is called ‘Acceleration,’ which is fitting for a Cadillac,” says the Florida resident from Boca Raton. “I’m the lead singer and rhythm guitarist, so there’s a lot of pressure on me. Pipo [Derani] qualifying the No. 31 Whelen Engineering Cadillac gives me a chance to warm up my vocal chords. We do a little bit of everything from country to rock, and I have four original songs that we’ll perform, so hopefully the fans will like that. You have to go onto the stage with full send. You have to go up there and give your heart out, just like you would do on the track in the Cadillac. It’s my dad and some of his friends. My dad has always been into music and he was a bass player, and we put this band together about eight years ago and had fun with it every week. We got an opportunity to play at the Sebring race four years ago. It was a lot of fun, and continues to be.”

Gar Robinson not only won the LMP3 pole for tomorrow’s Twelve Hour, he may have produced the best quote when IMSA Radio’s Shea Adam asked him about a “moment” in Turn 1 and whether he thought it was all over.

“Nah, just keep going. I just figured it’s either gonna stick or it’s not,” he said. “We’ve got such great audience in Turn 1 so you’ve got to show up for those guys. And typically, I’ve always had my crew down here, so you can’t let them hear you lift. No, just try and try and get it as clean as possible. And I think I actually found a line that has the fewest bumps possible, which is going to be really nice for my my stints tomorrow. So my back and myself are going to be ready for tomorrow.”